I was delighted to be able to get a 9 ml spray of 4160 Tuesdays’ Christmas Concert together with the crowd-funded Meet Me On The Corner this winter. Sarah McCartney calls it a “scarf scent”, because it has a lot of cinnamon in it, which can cause irritation on some people’s skin, but luckily I am not one of them so I can wear it on my pulse points. Christmas Concert came about because during the crowdfunding discussions about Meet Me On The Corner, which was inspired by a song of that name by a group called Lindisfarne, which holds a famous annual Christmas concert, followers of 4160 Tuesdays on social media started clamoring for an actual Christmas scent and suggested what its notes might be, including mandarin oranges, cinnamon, and pine needles. Being the creative and obliging perfumer she is, Sarah obliged with a seasonal limited edition fragrance, in both eau de parfum and room fragrance versions.

Does it smell like Christmas? Yes it does, if your Christmas memories include pomander oranges studded with cloves, hung on a balsam Christmas tree or wreath. Fortunately, mine do, as making those pomander oranges seems to have been a common holiday project when I was a child. I honestly don’t remember my own children making those at school or Sunday school, so I may have to do it at home with them now, although they are young adults!

Photo by Kaboompics .com on Pexels.com

Christmas Concert opens right off with a strong note of cinnamon, but I also detect the scent of cloves quite strongly. As expected, there is a lasting foundation of sweet oranges’ fragrance — more present in the beginning, but lasting well into the drydown. I perceive the pine needles as a green hum in the distant background, but they are there. This isn’t a very complex scent in that it doesn’t “develop” much, it is mostly linear, but it is delightful. Although I can wear it on my skin, it really does work well as a “scarf scent”; I sprayed some on the shawl collar of one of my favorite sweaters to wear around the house, and it wafted up to my nose from there for several hours. I can still smell it faintly on the sweater a day later.

Sarah mentioned on her website that one could layer Christmas Concert with Meet Me On The Corner to create a sort of “winter edition” of the latter, so I tried that. Wow! I already liked Meet Me On The Corner very much, but adding Christmas Concert to it creates a spicier version, adding complexity and nuance to MMOTC‘s citrus chypre. Or, shall we say, a certain “Serendipity“? 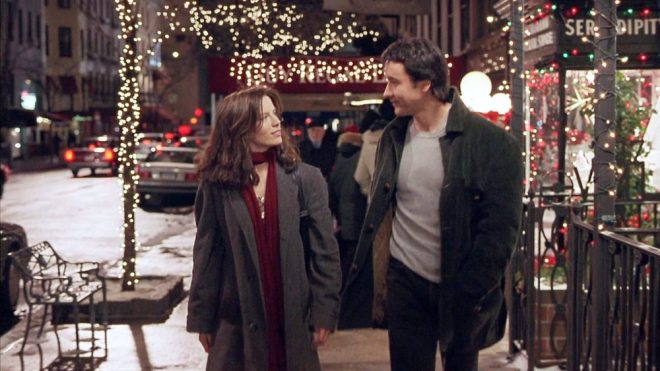 “Serendipity”, the movie; image from http://www.variety.com.

Merriam-Webster defines serendipity as “the faculty or phenomenon of finding valuable or agreeable things not sought for”, others have called it the phenomenon of “happy accidents” or fortuitous accidental discoveries. 4160 Tuesdays is famous for its serendipitous fragrances, sometimes created when a batch of one fragrance has been mistakenly combined with another (Brigadoon) or when a special ingredient has been amped up in an existing fragrance (Sarah made a number of variations on her fragrances this fall, when customers could request that various ingredients be increased; I am the happy owner of Eat More Flowers, a version of Eat Flowers Sarah created with extra rose, orris, and violet leaf). Given the origins of Christmas Concert in a Facebook group’s musings, and how well it combines with the long-planned Meet Me On The Corner, I would call that serendipity.

If you’ve never seen the movie “Serendipity”, pictured above, it is a charming Christmas rom-com with two of my favorite actors, John Cusack and Kate Beckinsale. It was made before Christmas rom-coms were destroyed by Hallmark Christmas movies and their reactionary spawn. Of course, another reason I love the movie is that I spent half of my 20s in New York; it is truly one of the most magical, romantic places in the world at Christmastime, and the cafe Serendipity is real. It was a great date venue, and I’m sure it still is!

So now when I wear Meet Me On The Corner layered with Christmas Concert, I will think happily of New York at Christmas, and chance meetings that seem like accidents but may be destiny. Thank you, Sarah! Merry Christmas and happy Boxing Day!

Do you associate any fragrances with serendipity, either in how you discovered them or how you like to layer them? Please share in the comments!