I live in a part of the US that was near, but not in, the zone of “totality” for this week’s total solar eclipse. Nevertheless, the moon’s coverage of the sun peaked here at about 98%, which was dramatic. Lots of excitement about it in my city; libraries, museums and schools handed out free “eclipse glasses” so people could look at it safely (btw: yes, you can go blind from looking directly at a solar eclipse, or at least do serious damage to your eyes).

One blog I follow had the wonderful idea of asking perfumistas what special scent they would wear for the occasion. Many responses were that the commenter would wear either a really special occasion perfume, or something that referred to the sun or moon. My choice? L’Heure Attendue, by Jean Patou. I mean, how could I not choose that? This week’s eclipse was the DEFINITION of the “awaited hour”; some estimates claim that American employers lost several hundred million dollars of productivity due to their workplaces coming to a halt during the eclipse. (Not shedding tears for them. This major astronomical event doesn’t happen every day).

So, L’Heure Attendue. It was launched in 1946, the reference being to the long-awaited liberation of Paris and the end of World War II. The perfumer was Henri Almeras, working for the couture house of Jean Patou, who created most of Patou’s legendary fragrances including Joy. The vintage advertising showed the perfume as a rising sun and the beautiful bottle shared that optimistic image of dawn: 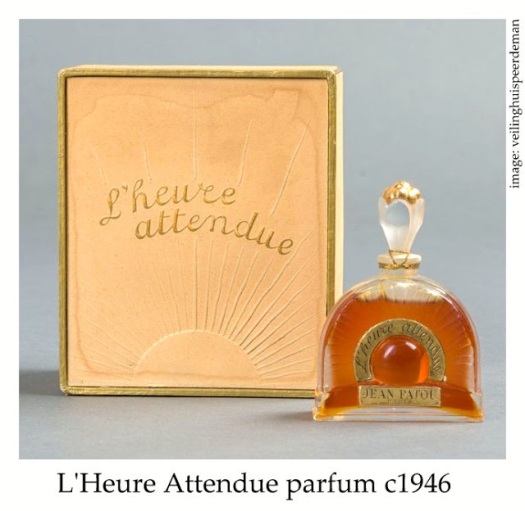 Australian Perfume Junkies has some lovely photos of a vintage bottle found in an antiques market, with commentary. According to some commentators, the house of Patou registered the name as early as 1940, after the Nazi invasion of France and occupation of Paris, already hoping for the end of the war. The original ad copy says: “Created in a mood of hope, to capture your dreams, your desires, to bring them nearer to realization …”

It has been reformulated at least twice: once in 1984, when some of Patou’s classic perfumes were reissued, and again in 2014, as part of Patou’s “Collection Heritage.” 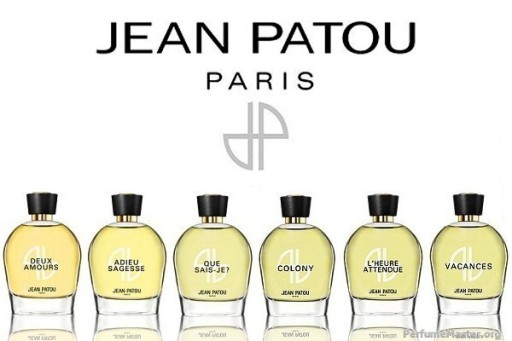 That is the version I have, and it is lovely. The reformulation was done by Thomas Fontaine. I would be remiss if I didn’t comment on the bottle. It is heavy, high-quality glass, clear enough to be mistaken for crystal; the weight and the rounded shape of the bottle feel elegant in the hand. It is a pleasure to hold. The notes are listed on Fragrantica as: top notes: tangerine, aldehydes and neroli; middle notes are rose, jasmine, ylang-ylang and peach; base notes are opoponax, patchouli, sandalwood and amber.

These notes are quite different from those listed for the 1946 original: top: lily of the valley, geranium, lilac; heart: ylang-ylang, jasmine, rose, opopanax; base: mysore sandalwood, vanilla, patchouli. The opening must be very different from the original, but it is delightfully sunny: a light hand with the aldehydes but enough to give it a classic nuance, combined with the light floral of neroli and freshened by the citrusy tangerine (a fragrance note I appreciate more and more — not too sour, not too sweet).

The middle notes of rose, jasmine, ylang-ylang and peach are almost the same as the original except for the addition of peach and the placement of the opoponax; my nose isn’t sophisticated enough to distinguish whether the latter is appearing among the heart notes or, as listed for the original, in the base notes. Opoponax is also known as “sweet myrrh” and is used to impart sweet, honeyed balsamic notes. In the 2014 L’Heure Attendue, it lends a lightly Oriental nuance to the floral notes that deepens as the fragrances dries down. Overall, though, I don’t think I would place it in the category of spicy Oriental, as I don’t pick up on any spices here, just warmth. Maybe it’s a “floriental.”

The base notes in the 2014 formulation differ from those listed for the original: they are opoponax, sandalwood, patchouli and amber. The original lists opoponax as a middle note, with sandalwood, patchouli and vanilla in the base. The only real difference is the substitution of amber for vanilla. I think Mr. Fontaine may have carried forward the sweetness of the peach in his reformulation to combine with the amber in the base and create an impression of vanilla-like warmth.

I do find this L’Heure Attendue to be a warm scent, unlike at least one other reviewer‘s reaction to the vintage original EDT. She found the lilac note of the original to be melancholy; it is not present in the new version, nor are the geranium and lily of the valley notes from 1946. PerfumeMaster sums up the new one nicely: “The fog in the atmosphere has dissolved, night is no more and the sun has risen gloriously once again.” That’s also a pretty good description of the recent eclipse! It was truly amazing to watch the black circle of the moon slowly creep across the face of the mid-afternoon sun blazing in the sky. As I was not in the path of eclipse “totality”, daylight did not disappear, but the light dimmed noticeably and the temperature cooled ever so slightly when the moon’s coverage of the sun was at its peak. The leaves of the trees acted as pinhole cameras, with the light of the eclipse shining through tiny gaps between them and casting thousands of crescent-shaped shadows on the ground. The moon continued its progress and full daylight was eventually restored.

As L’Heure Attendue slowly fades on my skin hours later, it leaves a lingering, sweet warmth. It is elegant and ladylike, but not chilly. It almost feels like a softer, gentler Chanel No. 5, probably because of the similar floral heart notes, the aldehydes in the top notes, and sandalwood and patchouli among the base notes. They have other notes in common — notably, Chanel No. 5 EDP (created in 1986 by Jacques Polge) has a peach top note, which the original L’Heure Attendue did not have but the new one includes as a heart note. I’m glad to recognize the similarities, as the original Chanel No. 5 eau de toilette and parfum were my mother’s scents and I don’t want to wear that particular Chanel, but I’m enjoying this “kissing cousin” very much. I especially like the contrast between the sunny opening, the progression through rosiness, and the slow, warm drydown. Like the dawn of a new day … the awaited hour. 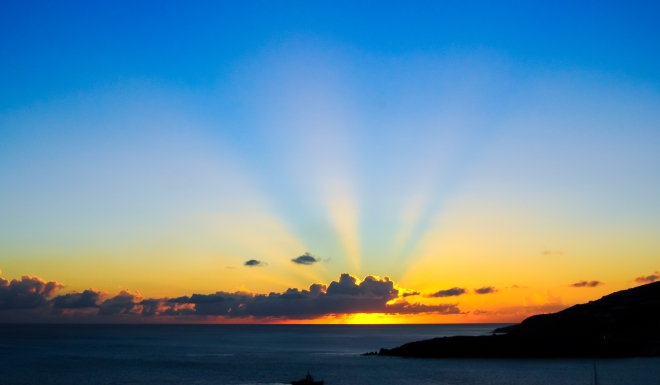 Dawn through clouds; photo from pexels.com

Did you choose a special scent to wear during this eclipse, or have you done that for any other natural event, like a solstice?

4 thoughts on “Fragrance Friday: Total Eclipse of the Sun”