In honor of American perfumer Jeffrey Dame’s generous giveaways last weekend and this one, on Facebook Fragrance Friends, today’s Scent Sample Sunday is devoted to one of the samples he sent me in addition to my freebie:  Black Flower Mexican Vanilla.

It is on my wrists as I write this, and wow, is it scrumptious! It’s not really gourmand, though; it has enough citrus, floral and other notes to prevent that. It is one of the “Artist Collection Perfumes”, described as creative collaborations between Jeffrey Dame and his father, artist Dave Dame. The artwork on the bottles’ labels is by Dame Pere. The fragrance is described as “a blend of vanilla absolute with touches of lemon, grapefruit, caramel, nutmeg, gardenia, jasmine, sandalwood, patchouli, vetiver, musk, and tonka.” It was launched in 2014. You can read more about Dame Perfumery and its three generations of Dames here.

Black Flower Mexican Vanilla is mesmerizing. It reminds me of the late, great Anne Klein II , a discontinued gem that I wore in the 1980s and which now commands outrageous prices online, if and when you can find it. Like AKII, it opens with a healthy dose of citrus, but the vanilla permeates top, heart and base. Like AKII, the floral notes emerge shortly after the opening and blend beautifully with the omnipresent vanilla. BFMV has gotten enthusiastic nods of approval from the two males in my household (husband and teenaged son), also reminiscent of AKII, which is the only fragrance I’ve ever worn that got me compliments from strangers on the New York subway.

I am especially enjoying BFMV because I’ve been looking for a vanilla-based fragrance I would like. My preferences lean heavily to greens, florals and chypres, with a special fondness for muguet and narcissus (yes, I have two bottles of Penhaligon’s Ostara). I haven’t been won over by any truly gourmand scents, and so many vanillas now are gourmand more than Oriental. BFMV is classified as an “Oriental Vanilla” while AKII is listed as an “Oriental Floral”, paying heed to the spice and woody notes each one includes.

Vanilla has a fascinating history, too; its orchid-flowered vines are native to Mexico and Guatemala, where it was first discovered by Europeans. National Geographic explains:

Vanilla is a member of the orchid family, a sprawling conglomeration of some 25,000 different species. Vanilla is a native of South and Central America and the Caribbean; and the first people to have cultivated it seem to have been the Totonacs of Mexico’s east coast. The Aztecs acquired vanilla when they conquered the Totonacs in the 15th Century; the Spanish, in turn, got it when they conquered the Aztecs. 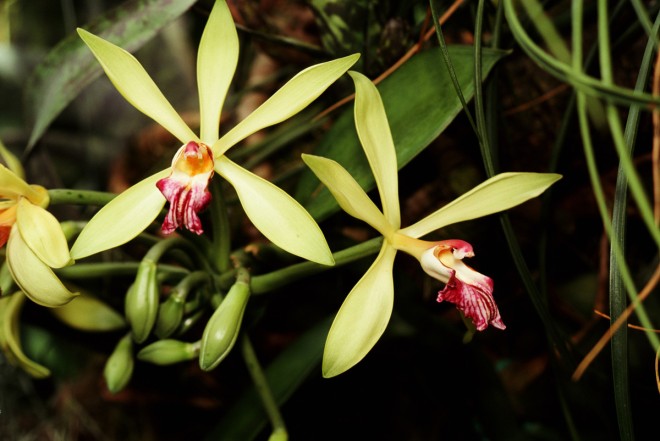 The Totonacs are supposed to have used vanilla pods as a sacred herb, using it in rituals, medicines, and perfumes. I find that the photograph on Dame Perfumery’s website, featured at the top of this post, is very evocative of that history and the actual scent, which is darker, spicier, drier and more beguiling than your standard vanilla. Nielsen-Massey, a purveyor of vanilla extract, points out:

Even after its discovery by Europeans, Mexico was still the sole grower of vanilla beans for another 300 years. That’s because of the symbiotic relationship between the vanilla orchid and an indigenous tiny bee called the Melipone. The bee was responsible for the pollination of the vanilla orchid flower, resulting in the production of the fruit… Vanilla from Mexico has a flavor that combines creamy and woody notes with a deep, spicy character, making it a delicious complement to chocolate, cinnamon, cloves and other warm spices. Even more, Mexican vanilla works wonderfully in tomato sauces and salsas, where it smooths out the heat and acidity of these dishes.

BFMV is very true to this heritage, as it tames the acidity of the citrus notes and brings its own creamy, woody, spicy smoothness and warmth to other notes like nutmeg, gardenia, jasmine, sandalwood, patchouli and vetiver.

As it dries down, I am finding that the vanilla intensifies while the floral notes slowly fade. Luckily for me, I love the notes that seem to be taking the stage with the vanilla during the drydown, especially sandalwood.

Black Flower Mexican Vanilla is a new love for me! It will be especially welcome now that autumn is here and the weather is cooling down. Thank you, Jeffrey Dame!