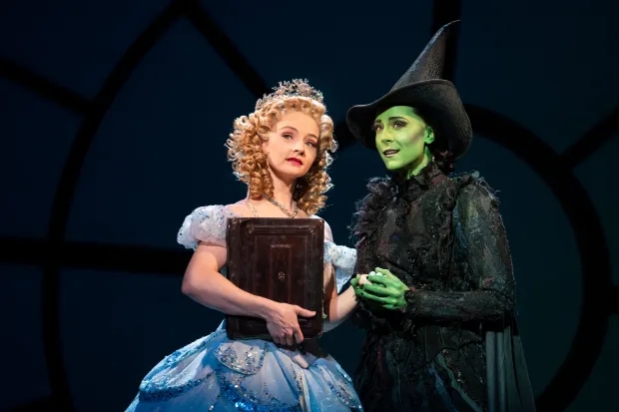 Okay, I didn’t choose an unknown scent today for Advent. I confess. I knew I was going to have a tough day at work (I’ve been back for less than a week) and some difficult conversations, so I pulled out my fragrance armor: Chanel No. 19, the green witch herself. If you want to read my thoughts on it, please click on the link and it will take you to a “Scent Semantics” post from September, when I wrote about No. 19 at some length.

I’m something of a “goody two-shoes” so one might think I would identify more with the character on the left. But as we learn from “Wicked”, Glinda the Good isn’t as good as she appeared; and Elphaba isn’t as bad as she appeared. But Elphaba puts up a formidable facade, and that’s what I needed today. I think I emerged unscathed.

And you know, I always remember what a long-ago boss told me (TBH, I didn’t like him much, but he did occasionally have some good insights). He had been an airline executive in his earlier career, and he said more than once, “It’s been a good day at the office when no plane has crashed.” He’s right. No planes crashed, or were at risk, in my job today. Onward to the holidays!

Two of my three kids are home for the holidays, yay! One is still in college, so he’ll be with us well into January. The other is fully independent, but arrived today and will stay at least through Boxing Day. The third, another fully independent young adult, will arrive on Thursday. It’s really great to have them home, even just for a short while; they make us laugh. We will go to a friend and neighbor’s house on Thursday evening for an informal holiday party in their backyard, which will really put me in the holiday spirit. I’ll get back on track with the Guerlain samples tomorrow!

Meanwhile, I am mulling over what scent(s) I want to wear on Christmas Eve, Christmas Day, and Boxing Day. I do have Caron’s Nuit de Noel, always a good option. I really like the gingerbread accord and spices in ELDO’s Like This. I also have a set of small sizes of Jo Malone’s special Christmas scents, like Orange Bitters and White Moss & Snowdrop. Fille en Aiguilles would be suitable, as well as Nuit Étoilèes, if I want evergreen vibes. Any suggestions for those three occasions? What will you wear?