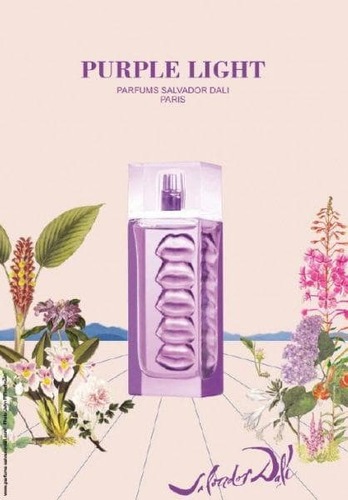 I like to seek out fragrance “bargain beauties”, for my own sake and for the sake of readers who may not be able to afford (or want to pay) the often eye-watering prices of niche fragrances. While there is much to recommend the practice of buying only a few, albeit expensive, high-quality fragrances, it is fun to educate one’s nose by trying many different fragrances, especially at the outset of this hobby, and that is how I acquired a number of ‘bargain beauty” fragrances. Luckily, I also have two young adult daughters, currently living at home during the pandemic, and they’re happy to share them! Of course, none would be bargains if they weren’t pleasing at some level, and likely to be used and enjoyed.

One such bargain beauty is Parfums Salvador Dali’s Purplelight. Launched in 2007, the nose behind it is Francis Kurkdjian, usually associated with much more expensive fragrances, including those from his own brand Maison Francis Kurkdjian. While Purplelight is in no way comparable to those fragrances, it is a very pleasant, soft, lilac-centered eau de toilette that works well. Its primary notes are bamboo, lilac, and musk, with companion notes of cherry blossom, jasmine, tiare flower, almond tree, and vetiver, according to Fragrantica. Purplelight followed the house’s 2006 launch of Purplelips, another lilac-forward fragrance, created by perfumers Antoine Lie and Guillaume Flavigny. I really enjoy finding pleasant bargain fragrances that have been created by well-known perfumers; as some of you know, one of my favorite bargain beauties is Adam Levine for Women, created by Yann Vasnier, who has also created fragrances for much more expensive brands like Arquiste, Frassai, Tom Ford, Comme des Garcons, Jo Malone, and others. My most recent bargain beauty fragrance line, which I wrote about earlier this week, is the Zara Emotions line created by perfumer Jo Malone (the person, not the brand). Parfums Salvador Dali has several bargain beauties, well worth exploring.

At first spray of Purplelight, what I smell most is a light green bamboo with watery undertones. As that dies down, I smell more and more of a soft lilac. This is very light also; I like the fact that to my nose, it doesn’t smell soapy, as some lilac scents do. Over a short period of time, a soft, gentle musk appears. Projection and sillage are minimal, but I can clearly smell Purplelight on my hand and wrist for a few hours. It is still possible to find gift sets of the eau de toilette that come with body lotion, and it seems likely that the two used together would increase the scent’s longevity. I enjoy Purplelight as an easy floral for warm weather or bedtime, when one doesn’t necessarily want a powerhouse or anything very challenging.

I can’t fail to mention the charming bottle for Purplelight, which matches that of its sister fragrance Purplelips. It is a rectangular column into which is set a row of concave lips. The juice inside is a light purple, which tints the bottle. The artist Salvador Dali incorporated lips into many of his artworks, and the theme has been carried into many of the bottles of Parfums Salvador Dali.

Have you tried any of the other Salvador Dali fragrances, either the bargain-priced ones or the more expensive “haute” line? 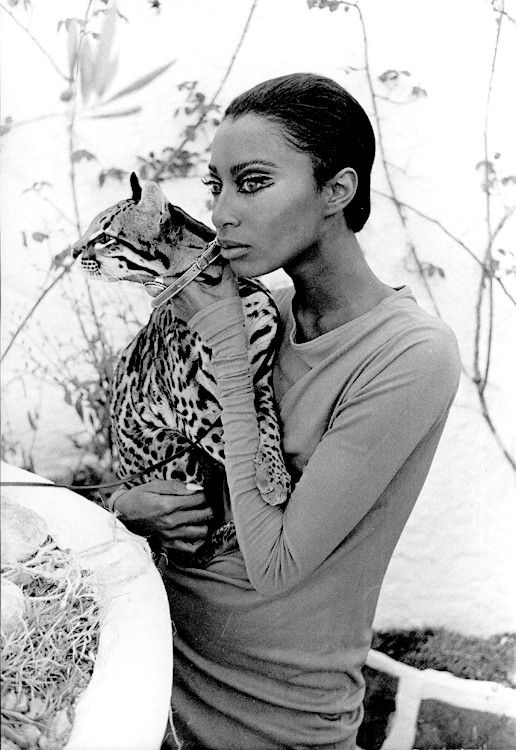 In the growing world of niche and “exclusive” perfumes, there are not many bargains. Prices seem to go up and up, into the realm of the ridiculous. And, may I say, some of the most expensive bottles of fragrance are also — if not hideous, tacky. House of Sillage, I’m looking at you, and Clive Christian, you’re not far behind (apologies to any readers who love those bottles, this is imho only!). The House of Sillage bottles look to me like demented cupcakes. I’m sorry, they do.

By contrast, some of my favorite bottles contain inexpensive but enjoyable fragrances. For instance, one of the first fragrances I blind-bought when I went down the perfume rabbit-hole was Vicky Tiel’s Sirene. Its frosted glass bottle, with a bas-relief of caryatids, is just gorgeous; and I like the scent itself very much. It is a rosy floral with a sharp opening and  soft drydown. At about $20 for 100 ml, why not take a chance on it? The bottle alone makes it worth the price.

At Christmas, my kids now ask me what fragrance I’d like them to get me that’s within their price range. I try to keep that under $25, and luckily there are some bargain fragrances out there to be had for that price. This year, my two daughters gave me Salvador Dali’s La Belle et l’Ocelot, in both the eau de toilette and eau de parfum formats. Friends, these are two of the prettiest bottles I own! 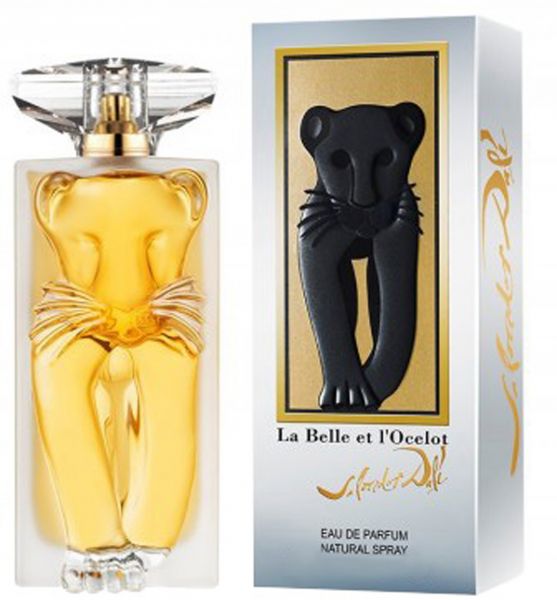 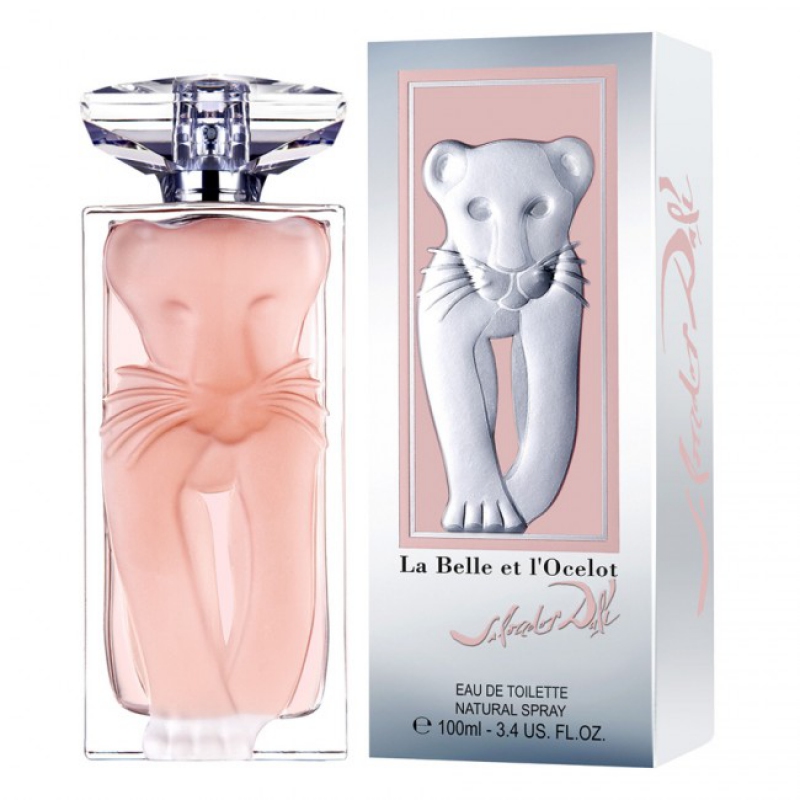 And the fragrances themselves aren’t bad either — not strong loves for me, but definitely likeable and wearable. The EDP (2014) is a warm, balsamic, slightly spicy scent, with top notes of Sicilian bitter orange, davana (artemisia), and elemi (a resin), heart notes of osmanthus, rose, night-blooming jasmine, and tonka, and base notes of patchouli, benzoin, and incense. It reminds me a bit of a lighter, less complex Opium or Obsession. Believe it or not, many of its notes are the same as those of Chanel’s Coromandel, which was launched two years later, in 2016. It’s very appealing in this season’s colder weather, and it is light enough that I think it will still appeal even in the summer, especially on warm, balmy evenings.

The EDT is a completely different fragrance from the EDP — not, as the website says, a softer version of it. The EDT’s top notes are apple blossom, nashi pear and grapefruit; heart notes are iris, Turkish rose and Egyptian jasmine, base notes are cedar and musk. Really, the only thing these two have in common is the beautiful design of their bottles. One intriguing fact is that both fragrances are meant to evoke an olfactory recreation of Beauty and the Beast, according to the website, but one can also perceive the EDP as more animalic (“beastly”) and the EDT as more floral (“beauty”). The EDT is a light, soft floral, with some fruitiness but not so much as to make it overly sweet. I think it would wear best in late spring and throughout the summer. I tend to prefer sharper, greener florals generally but especially in the spring, so this would be more of a summer scent for me.

Salvador Dali was well-known for his eccentricities, in his life as well as his art, one of which was that he kept a pet ocelot (which is a kind of tiny leopard) named Babou. He took Babou to many places and was often photographed with the animal: 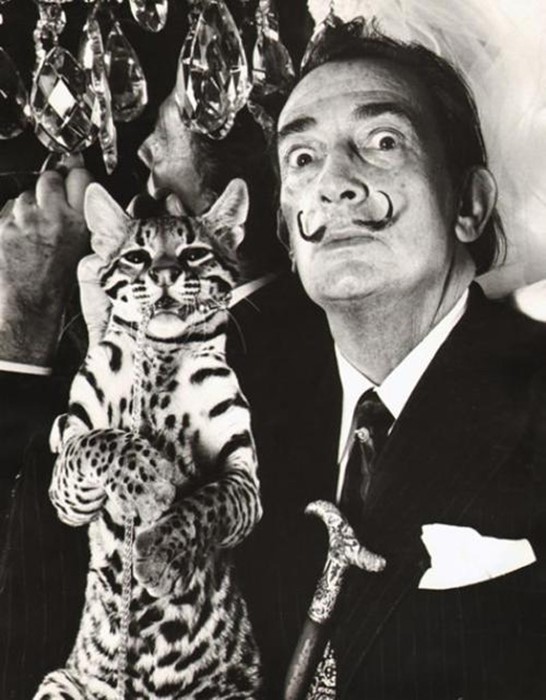 Another fun fact is that the popular culture we most associate now with “Beauty and the Beast” is the Disney Company’s animated film — but in real life, Walt Disney and Salvador Dali not only knew each other, but collaborated briefly on a short film called “Destino.” It was shelved during WWII, and revived in the 21st century by Walt Disney’s nephew, Roy Disney.

I got interested in Dali fragrances first by reading Luca Turin’s review of the original Dali, created in 1983 by Alberto Morillas, which he gave four stars. I have a mini of the parfum, and it is beautiful as a fragrance; its bottle is also lovely, as are all the Dali perfume bottles that are based on the sculptured lips and nose of Dali’s Aphrodite in his work Apparition of the Face of Aphrodite of Knidos. (I must say, though, I think the bottles for La Belle et l’Ocelot are even more lovely). Some well-know perfumers in addition to M. Morillas have created Dali fragrances: Mark Buxton created Laguna (also awarded four stars by M. Turin) early in his career, in 1991, and Francis Kurkdjian created Purplelight in 2007. Have you tried any of the Salvador Dali fragrances? Do you think any are “discount diamonds”?