Raise your hand if you’ve ever owned a garment by Jessica McClintock or Gunne Sax? That’s right — most of us females can put our hands down now. First under the name Gunne Sax, then under her own name, designer Jessica McClintock made the skirts and dresses teenaged girls wanted, from the 1960s until 2013, when she ceased manufacturing and retired. The company long dominated the market for girls’ special occasion dresses, but it also had a strong presence in the market for wedding dresses. Its specialty was figure-flattering, somewhat modest, feminine dresses, evolving from its 1970s-1980s look of prairie-style high necks and puffed sleeves. Thirty years ago, she launched her own fragrance, Jessica McClintock, and it became as ubiquitous as her dresses — maybe more so, as it appeals to a wider age range than the girls and young women who flocked to her racks for prom, special occasion, and wedding dresses. The fragrance continues to be licensed and sold, and you will find it almost everywhere, often in a gift set.

Like her dresses, Jessica McClintock is a “safe” buy, but also very pretty and reasonably priced. The Washington Post summed up the brand’s aesthetic perfectly in this article addressed to Jessica McClintock herself (yes, she’s a real person):

Your dresses set the stage for some of our most memorable and awkward high school experiences — and you let us feel picture perfect for those moments. (We might not have had Facebook, but as any ‘90s girl knows, disposable camera photos are forever.)

You were our introduction to strapless dresses, our testing ground for colorblocking. You taught us to embrace polka dots and satin ribbons and ruching at the waist (that one we really owe you for). But most importantly, you helped us feel pretty and sexy before we really knew what pretty and sexy felt like. Those sweetheart necklines, those curvy waists — we were Oscars stars, posing for our parents at backyard pre-prom ceremonies like they were red carpet paparazzi.

They were sweet, simple, attractive dresses, ones that we and our moms could both agree on. No zebra print or cutouts or questionably placed sequins — these were classic dresses that “showed off our shape,” as our mothers would say when we waltzed out of the department store dressing room. We thought we looked beautiful and grown-up in those strapless A-line frocks, and miraculously, our mothers agreed. And it’s no small feat to find common ground between a teenage girl and her mother. You, Jessica McClintock, accomplished the impossible.

But then you did more than that: You made us happy with our bodies. There is no more self-conscious creature than a teenage girl, with her ever-expanding hips and chest and her gawky arrangements of limbs. But your body-skimming frocks, cinched in at the waist with helpful boning in the bodice to remind us to stand up straight, worked with our changing bodies, not against them. We felt safe and secure in all that sturdy satin (er, polyester), feminine in those layers of tulle and beautiful with our shoulders (because who doesn’t like their shoulders?) exposed like grown-up women.

Even more relieving for parents was the fact that McClintock’s dresses flattered figures without showcasing too much of them. That made the designer an outlier in the increasingly provocative prom market, which now favors cut-outs over class. “Jessica, she had two points of view on prom: She had designs for good girls, and we had designs for sexy girls,” Shklovsky says. “But even our sexy girls were still good girls.”

And that’s what the fragrance is like: sweet but not too sweet, pretty, tasteful, a little sexy but still innocent, and something both teenagers and their mothers can like. And a bargain, too!

The fragrance has remained popular all these years because it really is good. It’s not great, it’s not a masterpiece, it won’t blow anyone’s socks off, but it’s just a really nice, wearable scent with more character than the tidal wave of fruity florals that has drenched the market in recent years. Per Fragrantica: “Top notes are cassia, basil, ylang-ylang, bergamot, black currant and lemon; middle notes are jasmine, lily-of-the-valley and rose; base notes are musk and woody notes.” When I first spray JMC, I get a burst of tart citrus, evenly divided between the bergamot and lemon. The cassia, black currant and basil add to the tartness and inject herbal greenness.

Very quickly, the lily of the valley steps to the fore. Or, as Victoria at EauMG says: “BAM. Lily of the valley all up in yo face. Plus some citrus. And some greens.” On my skin, I don’t smell much of the rose and jasmine in the middle stage, but I can sort of tell they are there, hovering around the perimeter and adding some nuance to the lily of the valley. The green, herbal notes of the opening phase persist, and make this more of an aromatic floral than, say, a white floral. Given that the citrus notes, as usual, vanish quite early, the ongoing tartness that provides the contrast to the lily of the valley note is likely from the cassia and blackcurrant. If you know what the plants look like, there is also a pleasing reference to the visual contrast between the shiny black fruit of the blackcurrant and the pure white bells of lily of the valley.

Here’s something worth noting: I ended up having much more to say about Jessica McClintock than I had expected. And that too is characteristic of this fragrance: there is more to it than one might think, and its appeal sneaks up on you. 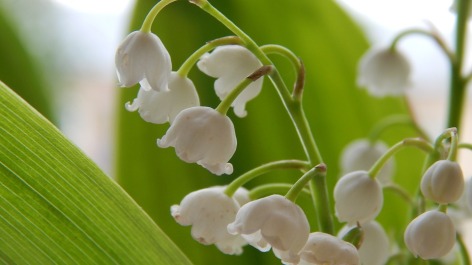 Lily of the valley; image from http://www.pixabay.com

One thought on “May Muguet Marathon: Jessica McClintock”