Today’s lily of the valley fragrance is Oriza Legrand’s Muguet Fleuri. A very beautiful scent, it is more than a muguet soliflore. It has a classic structure anchored by a base note of oakmoss. Top notes are, yes, lily of the valley, grass, and green notes (although the Oriza Legrand website lists them more eccentrically as “feuillages vertes, herbes folles, muguet sauvage”). Middle, or heart, notes are lily of the valley (here listed by Oriza LeGrand as “muguet des bois”), violet leaf, angelica and galbanum. Base notes are lily of the valley blossoms (“clochettes de muguet frais”), oakmoss, and wild lily (“lys des pres”, or “lily of the field/meadow”). I reviewed Muguet Fleuri two years ago, in my first “May Muguet Marathon”, but that was based on a sample. A question I posed at the end of the post was whether I should spring for a full bottle. Reader, I did. So here’s a new review.

Instead of true citrus at the top of Muguet Fleuri, we get a burst of lemony fresh greenness that is the first impression, quickly followed by the lily of the valley, which is strong. The heart notes that include violet leaf, angelica and galbanum with the “muguet des bois” send Muguet Fleuri in a different direction than a straightforward floral. All of these heart note companions to the muguet are intensely green. The galbanum gives it a little “bite” as it dries down, a bit of an edge. The angelica brings in an herbal tone. The violet leaf is meant to be somewhat metallic and aqueous, though I’m not sure I would describe it that way, but it is definitely more of a crunchy green than a soft one. Violet leaf appears in many men’s fragrances, so on balance, this phase of the fragrance is where it becomes less feminine and more unisex to my nose, suitable for either a man or a woman. I think this is why Fragrantica categorizes Muguet Fleuri as an “aromatic floral.”

Kafkaesque wrote a very thorough review of Muguet Fleuri. She found violet flowers peeping between the green leaves, but I did not. In the heart phase, the only real flower I smell is the lily of the valley, surrounded by shades of green; it is very true to the actual flower, as I’ve written before. Because of the continuous presence of that lily of the valley, the fragrance doesn’t develop and evolve as much as other high-quality fragrances, but it lasts well, and the base notes are intriguing. The oakmoss seems to anchor the muguet flowers in the earth, with the green leaves and stems sturdily supporting the ethereal white blossoms that look like tiny bells (“clochettes”).

Kafkaesque found the final stage slightly woody: “Muguet Fleuri’s drydown on my skin really feels like a bouquet of lily of the valley, cedar, violet leaves, and violets, even though the latter is now a mere impression more than a distinctive, powerful, individual note. The whole thing is dusted with floral powder that feels sandier than ever, and a light touch of very expensive floral soap.” The Smelly Vagabond also had a very positive review, and an insightful comparison to the classic muguet scent, Diorissimo.

Oriza Legrand deliberately presents its fragrances in old-fashioned design and presentation, to emphasize its history and heritage. Muguet Fleuri is listed among its “Art Deco” Collection; to me, its design elements are reminiscent of the flower illustrations of Cicely Mary Barker, creator of the Flower Fairies in her series of children’s books. 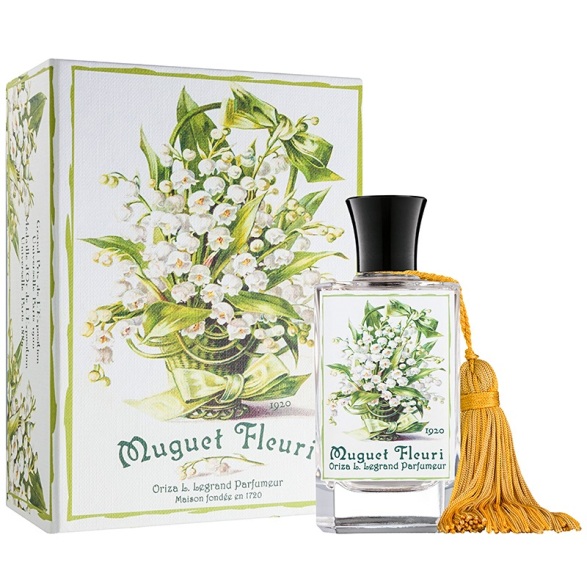 Taken together, Muguet Fleuri is a happy, uncomplicated fragrance that is sturdier than it might appear at first impression. I like the opening burst of green, the persistence of various forms of muguet throughout, the well-chosen companion notes, and the oakmoss base. This is a thinking woman’s muguet, but it is far from introverted. It has a warmth to it, after the dewy green opening and herbal green heart, that grounds it and makes it a grown-up muguet. It also comes with a pretty card, imprinted with the same images, and the following cheerful message:

“Que ces quelques brins de Muguet Fleuri vous portent bonheur!” or “May these few sprigs of Lily of the Valley bring you happiness!”. They did.