Today is the last day of May, so it’s time to address the most legendary muguet fragrance of all: Diorissimo. So many words have been published trying to describe Diorissimo in its many forms and reformulations! CaFleureBon has a wonderful short article by perfumer Michel Roudnitska, son of the legendary perfumer Edmond Roudnitska who created Diorissimo for Christian Dior. It includes his memory of the large patch of lilies of the valley his father planted in order to study and capture their fragrance.

There are many discussions of Diorissimo on various notable perfume blogs and websites, listed here: Now Smell This, Bois de Jasmin, The Black Narcissus, The Perfume Expert, Perfume-Smellin’ Things, The Candy Perfume Boy, The Perfumed Dandy, The Non-Blonde , Undina’s Looking Glass, Australian Perfume Junkies, and even perfumer Ayala Moriel at Smelly Blog. These people are very knowledgeable, so please read their insights!

I own a few versions of it: a vintage eau de cologne in the tall, ribbed bottle; a mini flask of eau de toilette from a “Dior Voyage” set that includes Tendre Poison, so it must date after 1994 but before Tendre Poison was discontinued by 2010; a 2013 bottle of the eau de toilette; and a 7.5 ml flask of the parfum from December 2010. (For dating fragrances or cosmetics, try CheckCosmetic.net if you have the batch number; for dating Dior perfumes, read this helpful post by Raiders of the Lost Scent, and for dating Diorissimo by bottle, go to Perfume Shrine; these are all really helpful if you decide to try to buy a vintage bottle).

I came to know and love Diorissimo in the 1980s, when I had a splash bottle of the eau de toilette in the “houndstooth” packaging. 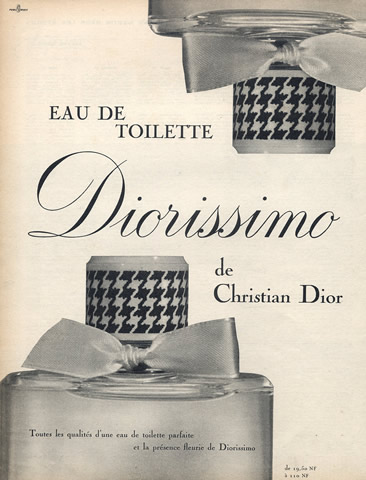 It was, I thought, the perfect fragrance for a young woman, feminine but professional, becoming independent and moving from girlhood to womanhood. Little did I know that Edmond Roudnitska had basically bottled that very transition with a focus on sex: Diorissimo‘s original formula, starting out with a green, fresh opening and the white purity of lilies of the valley, so often carried by famous brides in the 1950s (Grace Kelly in real life, Audrey Hepburn in “Funny Face”) and evolving into a sensuous blend of jasmine, sandalwood and civet, as if he had distilled a wedding night in a bottle. Ayala Moriel lists the fragrance notes as follows: Top notes: green galbanum notes; heart notes: lily of the valley, boronia, calyx, rose; base notes: jasmine, sandalwood, civet. She also thought the EDT she reviewed in 2006 had some oakmoss in the base.

So how do my various incarnations of Diorissimo fare? The vintage eau de cologne is a bit off and it opens with an alcohol-laden blast. It soon dries down into the warm, radiant Diorissimo I remember, with a creamy undernote. The 2013 eau de toilette has a thin, shrill opening. Not awful but not the lovely gust of spring I want. As it dries down, it becomes more pleasing and more like my old friend. The circa 1990s eau de toilette smells wonderful; a somewhat jarring opening that quickly moves into soft muguet and lingers on the skin. The 2010 parfum is really different from the others. It too has a slightly jarring opening but that transforms into a green note that smells more herbal to me than the eaux de toilette. As it dries down, it becomes more and more complex and nuanced, even a bit spicy but without any “floriental” tone. Of them all, the one that I just enjoy the most without overthinking it is the 1990s eau de toilette, probably because it is the closest to the version I used to wear. But the parfum is so intriguing! I may have to get a fresh sample of the current parfum for comparison’s sake!

Note that I haven’t mentioned the eau de parfum. When I first decided to try Diorissimo again, after many years apart, I went to a nearby high-department store and asked to try it; the sales associate suggested that I try the eau de parfum. The first blast was great, all the greenness and muguet I remembered. The drydown was not so great on my skin. In fact, I ended up washing it off after a couple of hours because it started to smell urinous. I wonder if there wasn’t some kind of synthetic civet in the base notes that just didn’t work well on my skin. I later found out that the EDP is actually quite different, a new version by Francois Demachy and not really based on the Roudnitska formula. From the Dior website: “Diorissimo Eau de Parfum is a new expression of the original Diorissimo Eau de Toilette. It is richer, deeper and more intense, with a more dominant jasmine floral heart note.” I didn’t care for it after its very nice opening.

Are any of these versions true to the flower itself? Not as much as some others I have tried this month, but then I don’t think re-creating the actual scent of the flower was the point of Diorissimo. As a fragrance, it is more of an evocation of a place and a mood, and a reaction against the heavy, formal floral perfumes that were so prevalent at the time of its creation. The place? A wooded glen carpeted with lilies of the valley and other herbs. The mood? Wedding night in a bottle. 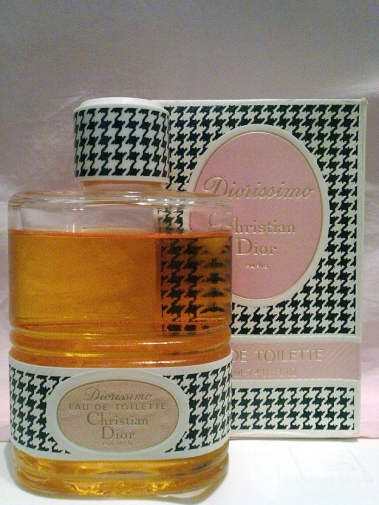 3 thoughts on “May Muguet Marathon: Diorissimo”