Deep breath. I am not an experienced perfumista and I’m not sure I can do justice to this new Guerlain, but I will do my best. The new Guerlain Muguet 2016 is an entirely new eau de toilette by Guerlain’s in-house perfumer, Thierry Wasser. It builds on the tradition, begun in 2006, of Guerlain releasing its 1998 formulation of Guerlain Muguet every year in a different limited edition bottle on May 1, the day when traditionally the French present bunches of lilies of the valley to friends and loved ones as a “porte-bonheur”, a good luck token or “bringer of happiness.” So to start, I defer to “Monsieur Guerlain”, the longtime blogger and Guerlain aficonado, to describe Guerlain’s tradition: Muguet. 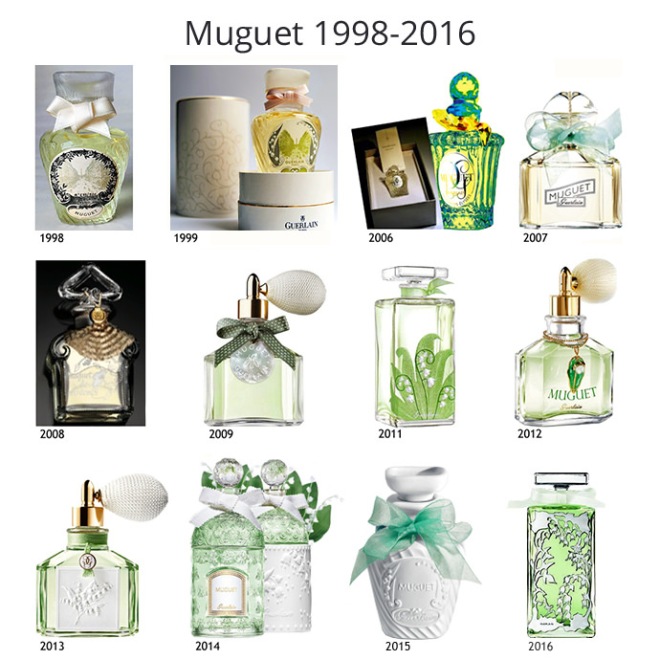 As you can see, the limited edition bottles are all beautiful, including this most recent one, which is a crystal bottle encased in silver-plated filigree, designed by the Parisian jewelers Ambre & Louise and influenced by the Art Nouveau master Alphonse Mucha. I saw the actual bottle at Neiman Marcus on May 1 this year, which I visited for the express purpose of trying this new Muguet.

Photographs really do not show how beautiful the bottle is, with its silver filigree (including a part that can be engraved for the happy recipient). The price of this limited edition, almost $500 for 100 ml, is out of reach for most people but it does seem less outrageous if you think of the bottle as a lovely piece of jewelry, which it is, that just happens to contain a beautiful fragrance. (See below, for more about the new flacon). The delicate silver design perfectly sets off the pale green juice within. 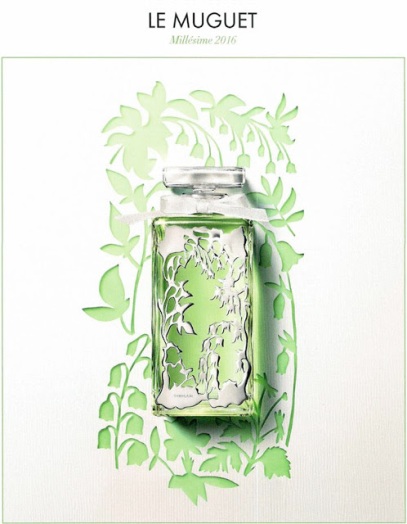 Muguet 2016 is beautiful and understated. Dare I say elegant? It opens with a bright, but not harsh, green note that smells like leaves with the flowers. I do not smell any citrus, unlike the bergamot in its predecessor, the Guerlain Muguet of 1998-2015, or the lemon note in the original Guerlain Muguet, only a vaguely lemony tone to the lily of the valley note, just as in the actual flower (the lemony tone and greenness are what make lilies of the valley smell fresher and lighter than jasmine, just as the lemony notes you smell in pink magnolia flowers, Magnolia Soulangeana, make them smell lighter than the heavier white flowers of Magnolia Grandiflora, the evergreen Southern magnolia). Of course, as all lily of the valley scents are manmade, who knows what citrus elements have been combined to evoke the flower? As Muguet 2016’s opening fades, the greenness diminishes and the floral notes become stronger but remain dewy and fresh. Also unlike its predecessor, there is no lilac. I do love lilac but I usually prefer my muguet front and center, with fewer floral companion notes, so I don’t miss that.

As Muguet 2016 dries down, the jasmine note becomes stronger but never overpowering. The only four notes officially listed are muguet, rose, jasmine and green notes, and I don’t really smell rose separately but this is certainly not a jasmine or muguet soliflore; as it dries down further, it becomes creamier and even a bit like Nivea cream in the best possible way, given that Nivea’s fragrance notes include lily of the valley, rose and jasmine, originally created by use of more essential oils than synthetics. Monsieur Guerlain says that this creaminess makes it closer in feel to the original Guerlain Muguet of 1908, which makes sense as Nivea was launched in 1911. Although only two notes of the traditional Guerlain accord, the so-called “Guerlinade”, are listed for Muguet 2016 (rose and jasmine), and it doesn’t smell “vintage” at all, I wonder if the creaminess may come from a touch of tonka bean or sandalwood, both of which have been included in the Guerlinade accord in its various forms. I don’t smell anything that seems like iris or vanilla, two of its other traditional components. To me, Muguet 2016 never becomes soapy.

The fragrance is an eau de toilette, so it doesn’t last long, but while it does it is lovely. You can extend it a bit by putting a fragrance-free moisturizer or cream on your skin first. Having done that, I can still smell Muguet 2016 on my skin after three hours, which isn’t bad for an EDT. Is it worth $480? The fragrance alone, no. The fragrance in the new flacon? Maybe. This is a truly beautiful fragrance that appeals to my love of muguet; and if I ever decide that I deserve a lovely new piece of jewelry, complete with lovely new perfume, I will buy one of these gorgeous bottles. Maybe I will even get it engraved!

So, about the bottle. Ambre & Louise‘s blog has a long, evocative explanation of their design, citing inspirations that range from Alphonse Mucha’s Printemps to a greenish self-portrait by Belgian painter Leon Spilliaert (that shows Printemps hanging on the wall behind him), to crenellated white Victorian houses, to Pre-Raphaelite women, to green absinthe and pearls. They seem to have consciously created visual references back to 1908, when the first Guerlain Muguet was launched. The silver filigree design is clearly based on the stylized leaves that appear in so many of Mucha’s works, framing the principal figures. Here, the principal figure is the pale green perfume framed by the silverwork. Interestingly, while the design of the filigree and the background against which the bottle was photographed both include small silver bells that resemble lilies of the valley, nothing in the design recalls the striking shape of the plant’s actual leaves, which are so unique and sculptural, unlike Ambre & Louise’s gold and silver “Gingko” collection. The design includes leaves, but they do not resemble the real ones.

It is a pleasure to witness the creative thought and artistry that went into the creation of this fragrance and its bottle. They are definitely on my wishlist! Between the elegant, floating fragrance and the Pre-Raphaelite fin-de-siecle design references, Muguet 2016 reminds me of the poster for a new musical I saw in its London debut, The Light Princess. Here’s a thought: I would be very excited if Ambre & Louis created a miniature of their flacon to be worn as a necklace, including the Muguet 2016 eau de toilette, as Elsa Peretti once did with her iconic bottle design for Halston’s eponymous perfume. 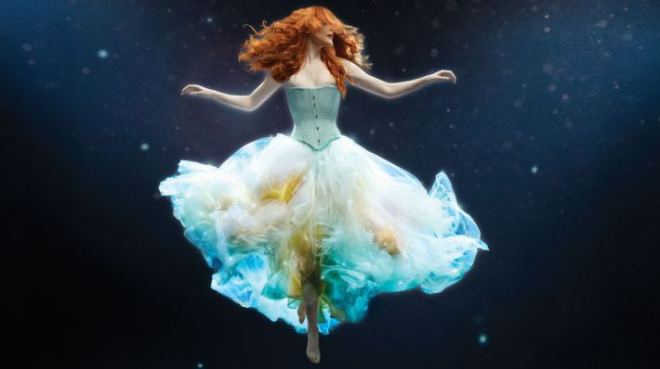 The Light Princess; photo from The National Theatre