Another truly unisex rose is Atelier Cologne’s Rose Anonyme. When it was first released in 2012, at least one reviewer (the marvelous Jessica at Now Smell This)  thought it was more feminine than many of Atelier Cologne’s fragrances. As I don’t know many of those, I can’t really say for sure, but compared to most of the florals I own, Rose Anonyme smells very gender-fluid to me.

It has been described as having top notes of bergamot, ginger, and Turkish rose; heart notes of more rose, incense, and an accord of oud; and base notes of benzoin, papyrus, and patchouli, though the brand’s website now lists only rose, bergamot, and patchouli. Like the whole Atelier Cologne line, it has a higher percentage of fragrance (about 18%) than a typical “eau de cologne.” This is why their fragrances are called “Cologne Absolues”; they are meant to follow a traditional cologne esthetic with an emphasis on freshness, but have the longer lasting nature usually associated with an eau de parfum.

Rose Anonyme was created by Jerome Epinette. It was launched with a marketing campaign centered around a mysterious female jewel thief, which I find hilarious. When I watched the short video on the website, all I could think of was the animated character Carmen Sandiego. My children LOVED that series when they were little, so I saw a lot of Carmen.

Come to think of it, Carmen Sandiego might actually be a suitable avatar for Rose Anonyme. The bergamot and ginger top notes start it off with a lively, zesty but not sweet opening. As some of you know, I really enjoy bergamot as a top note; I like its slightly bitter, greenish citrus nature. It’s a good thing I like it, because at first, most of what I smell at the start of Rose Anonyme are the bergamot and ginger. I really do like that opening, though; “lively” is the word that best describes it.

Mark Behnke wrote about Rose Anonyme at Cafleurebon that he didn’t really smell the rose until after the opening, and my impression is the same. He also thought that the “oud accord” was really a combination of the patchouli, benzoin, and papyrus, but I couldn’t say for sure. I do smell, in the middle phase, a woody note that I’ve come to recognize as “oud”, although very few fragrances that are meant to include or evoke oud actually have any of the real thing; the “oud” is usually a synthetic re-creation. So I’m sure Mark is right. Kafkaesque wasn’t a fan of Rose Anonyme, except that she liked the drydown, toward the end. She did point out something that I noticed too, though I didn’t dislike it: there is a purple grape aspect to Rose Anonyme. It’s only there for about an hour, but it is noticeable. I actually like it, because some real roses do smell like grapes, “Lady Emma Hamilton” being well-known for that, as well as some other unnamed roses. 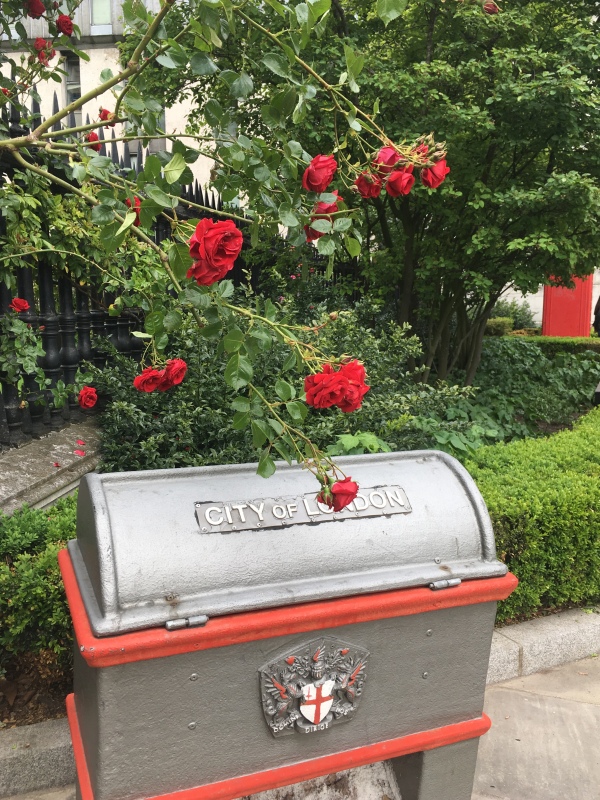 An anonymous rose in London, May 2019

My sample of Rose Anonyme came from last year’s Atelier Cologne Advent Calendar, which is an amusing gift that I have really enjoyed. Unlike most of the Advent calendars issued even by fragrance houses, this one is mostly fragrance samples, not other scented products. Eighteen of the 24 items are fragrances, most in the small sample vials. While I like Rose Anonyme, I don’t need a full bottle of it, given how many other lovely rose fragrances I have. I could see getting it in a small travel size like 7.5 or 10 ml.

Have you tried Rose Anonyme or any other Atelier Cologne fragrances? And happy Memorial Day to all, especially to those who have served in our armed forces (including my husband, a former naval officer).

Featured image and video from http://www.netflix.com