Odalisque by Parfums de Nicolai is an eau de parfum with a strong floral heart of lily of the valley, jasmine, and iris, heralded by top notes of bergamot and mandarin, and resting on a base of oakmoss and musk. The brand calls it “a unique fragrance for strong personalities”, and on the website, its listing highlights, through graphics, the notes of mandarin, muguet, and oakmoss.

“Odalisque” is a word whose meaning has evolved over time. One author explains:

The English and French term odalisque (rarely odalique) derives from the Turkish ‘oda’, meaning “chamber”; thus an odalisque originally meant a chamber girl or attendant. In western usage, the term has come to refer specifically to the harem concubine. By the eighteenth century the term odalisque referred to the eroticized artistic genre in which a nominally eastern woman lies on her side on display for the spectator. (Joan DelPlato)

Patricia de Nicolai created the fragrance Odalisque in 1989. It is a very French perfume, as befits its creation by a member of the Guerlain family (her uncle is Jean-Paul Guerlain). It is not an Oriental fragrance by any means, or even a French version of an Oriental, as one might expect from a perfume that refers to a harem.  No, this Odalisque is a woody green chypre with a classic chypre structure, but using muguet as the featured floral note instead of the more commonly used rose and jasmine (Odalisque’s heart notes include jasmine blended with iris, together with the lily of the valley). So why the name?

Some of the most famous paintings of “odalisques” were by French painters, from Boucher to Matisse. In fact, right now the Norton Simon museum in Pasadena, California has an exhibit of paintings called “Matisse/Odalique”. Matisse himself candidly admitted that he used the theme of the “odalisque” as a reason to paint female nudes, and it is clear that many Western painters adopted the subject because it allowed them to paint titillating scenes of naked women, offering themselves to the male gaze (and, one is meant to assume, sexual availability), while also allowing the artists to distance themselves and deflect criticism by making the women and the scenes “exotic.” 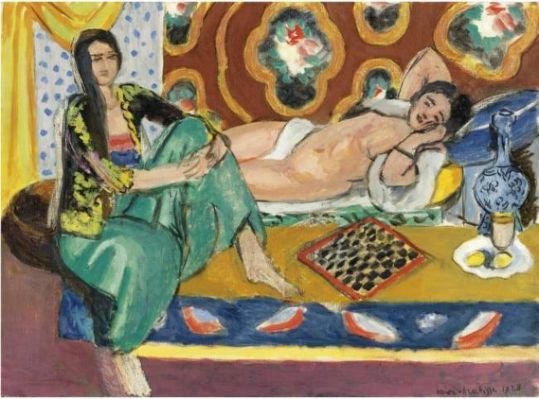 The heady flowers of rose and jasmine suit our traditional vision of the Ottoman Empire, but lily of the valley is quintessentially a Northern European flower, native to the cooler, temperate zones of the Northern Hemisphere, its preferred habitat being in shaded woodlands. Its prominence in Odalisque means that the fragrance is not exotic at all, although it is mysterious and beguiling. To my nose, the citrus opening leaves the stage very quickly, while I smell the oakmoss “base” right from the start. As the citrus notes fade, the greenness of the muguet takes over, the pure white lily of the valley flanked by rose and iris, as the odalisques in the paintings, frequently portrayed as white European women, are often shown attended by exotic Middle Eastern servants. 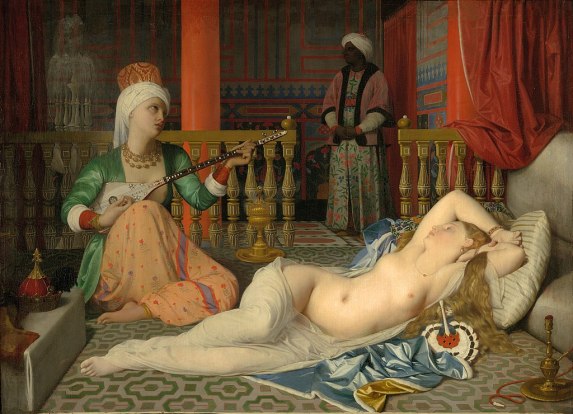 As it happens, one of the most famous French paintings using the trope of the “odalisque” also portrays a quintessentially European setting, green and woody like the chypre structure of Odalisque: Edouard Manet’s “Le Dejeuner sur l’Herbe.” That it refers to the figure of an “odalisque” is indisputable: the female model’s nudity, her pose with her body turned partly away from the viewer but displaying most of her naked body, her direct gaze, and the figure of another woman bathing at a distance, all evoke more traditional images of a concubine in a “Turkish bath” setting. One of the male figures wears an Ottoman-style flat cap with a tassel, reminiscent of a traditional Turkish fez. 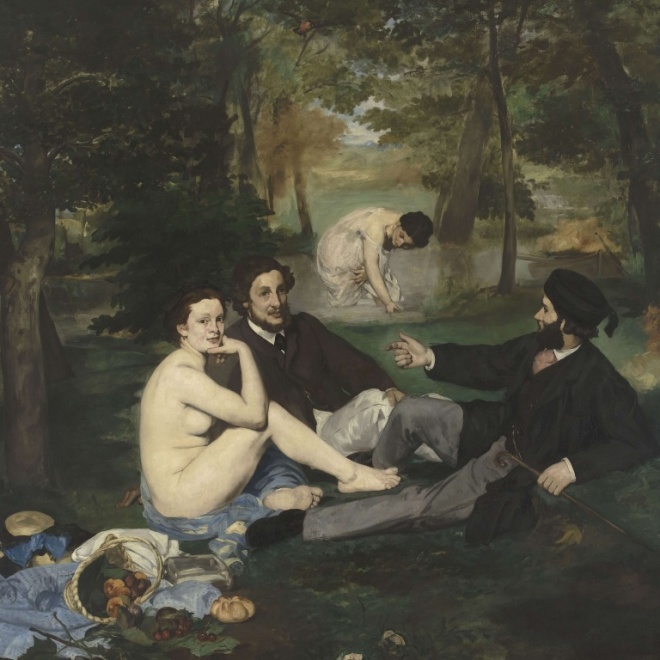 I don’t think it is a coincidence that a perfumer as intelligent as Patricia de Nicolai created a fragrance like Odalisque that so readily lends itself to an evocation of one of France’s most famous, treasured masterpieces.

Luca Turin regarded the original Odalisque itself as something of a masterwork. He commented thus about its original formulation:

Odalisque’s superbly judged floral accord of jasmine and iris, both abstract and very stable, allied to a saline note of oakmoss, initially feels delicate, but in use is both sturdy and radiant. It is as if the perfumer had skillfully shaved off material from a classic chypre accord until a marmoreal light shone through it.

What, exactly, is a “marmoreal light”? According to Merriam-Webster, “marmoreal” means “suggestive of marble or a marble statue, especially in coldness or aloofness.” There you have it. I defy anyone to look at Manet’s painting and not see a marmoreal light on the key figure of the naked woman.

By making the muguet the most prominent floral note in Odalisque, Mme. de Nicolai has emphasized the cool, white, marmoreal aspect of the fragrance, but she sets it against a powerful base of oakmoss and musk, just as Manet’s odalisque is highlighted against the dark green, woody background of the setting he chose so deliberately (and radically). Odalisque was reformulated after IFRA imposed new restrictions on the use of oakmoss in fragrance, but I can attest to the continuing power of its oakmoss base.  As much as I love the muguet heart note of Odalisque, ultimately the story it tells is one of oakmoss. I can smell it from the very opening of Odalisque, and it persists for hours, taking its place on the olfactory center stage after about an hour of the fragrance’s progression. On my skin, the oakmoss and musk last for at least 10-12 hours; I’ve applied Odalisque at night and I can still clearly smell those base notes the next morning.

The combination of oakmoss and musk is very sensual without being “sexy”, as Caitlin points out in her blog “This Side of Perfume.” The accord is too classic and elegant to warrant such a trite phrase. Like Manet’s model, this sensual accord is direct without titillating. It simply presents itself, unconcerned. It also lends a retro, vintage feel to Odalisque without making it dowdy. In sum, if you are looking for a classic, French, high-quality perfume that features muguet, this one should be on your list. It differs significantly from the ultimate French muguet fragrance, Diorissimo, and others like Guerlain’s Muguet; it is darker, mossier, woodier. It is also glorious. Have you tried it? 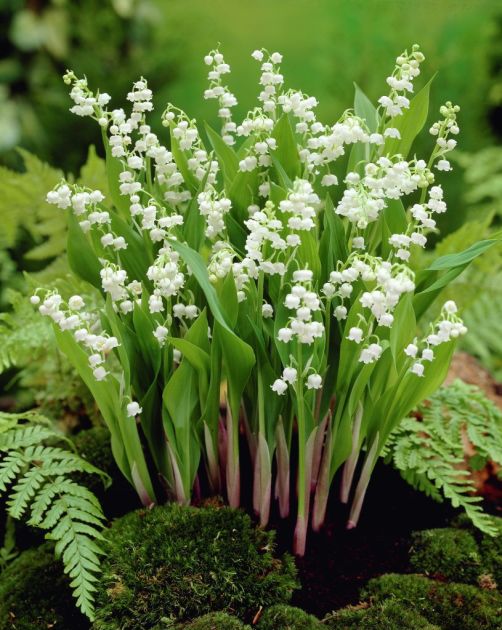 Lilies of the valley in woodland garden; image from Pinterest

11 thoughts on “May Muguet Marathon: Odalisque”