Les Parfums de Rosine is, famously, a perfume house dedicated almost entirely to the scent of roses. Every one of its fragrances has a central rose note, even if it is named something like Le Muguet de Rosine. Most are openly rose-centric. The line has an intriguing history, described in this article in Vanity Fair: Les Parfums de Rosine: A Beloved Parisian Import. I have a few of their fragrances, and I do love them. Possibly my favorite of those I own is Clair Matin, my choice for Mother’s Day today. It is a bright, soft, cheerful rose; and it comes in a bright, cheerful bottle. And luckily, this morning is a bright, clear morning, just as its name indicates. Happy Mother’s Day! I am sitting in my sunroom with one of my daughters, looking out a large picture window at my own bright pink rambling rose, which was planted in our garden by former owners decades ago. I think it is an old variety called “New Dawn“. It used to grow up through an old honeysuckle shrub; when that shrub died, we bought metal arbors and trained the sprawling rose over those. It only flowers once during the season, but when it is in bloom, it is literally smothered in pink roses. This year, they are lasting longer than usual because we had some very sunny, warm days that prompted it to blossom; then a series of very cool, sunny days that kept the blossoms fresh. 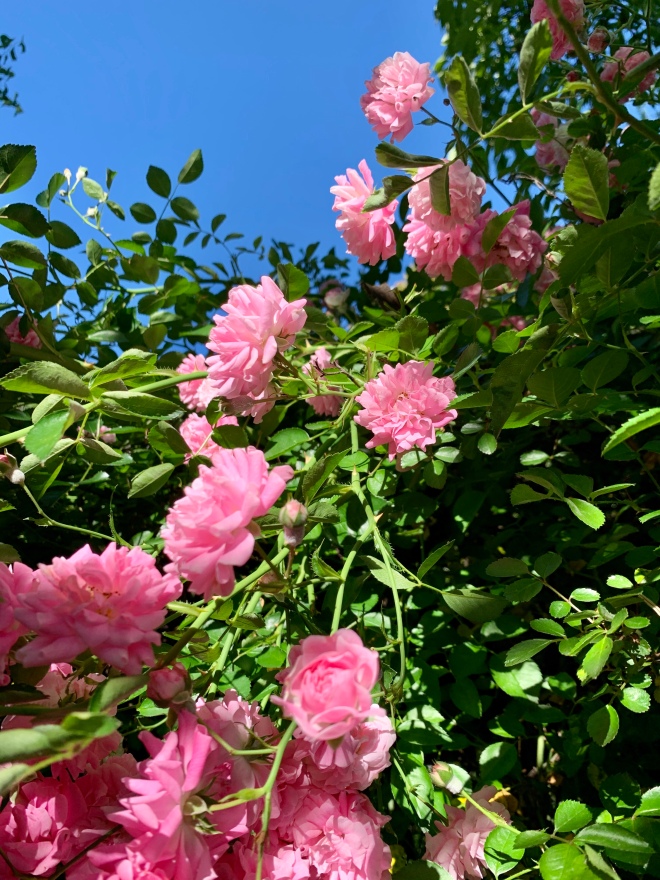 Fragrantica lists the top notes of Clair Matin as cassis, amalfi lemon and raspberry leaf; middle notes of chamomile, peony, rose and violet; base notes of musk, sandalwood, amber and apricot. When I first apply Clair Matin, I immediately smell the lemon with an herbal undertone that I ascribe to the cassis and raspberry leaf, but it also smells like chamomile. The heart notes are pretty evenly balanced between a light rose and the peony, and the chamomile persists. The flowers and chamomile have a sparkling, dewy aspect, well-suited to the fragrance’s name (and the name of my climbing rose “New Dawn”). As the scent dries down, the base notes I smell are a light musk and apricot, not really sandalwood or amber.

Clair Matin does not last long, but that’s fine: the impression it gives is of a bright spring morning, as clearly intended. The morning doesn’t last for hours on end; the early dew evaporates quickly from the pink petals and the green leaves and grass. One of the reasons I love the bottle that contains Clair Matin is that its bright colors of pink and green echo this freshness of the new day and this fragrance’s notes. And like the dew, Clair Matin vanishes pretty quickly. But oh, while it lasts, it is lovely.

Have you tried any of the Parfums de Rosine? They’re not easy to find in the USA, but you can see and sample them in person in my favorite store in the world, Liberty London (when it’s open …). Luca Turin has rated some of them very highly, like Rose d’Amour, which I also have and like.

Alternately, are you doing anything special for Mother’s Day? Did you happen to give or get any roses?