Okay, enough messing around with neon roses and such. It’s time for May to get serious, with a heavy-hitter, rose-based, niche fragrance: Portrait of a Lady, by Dominique Ropion for Editions de Parfum Frederic Malle. Wowza!

This lady packs a punch. She is, of course, one of the most legendary and popular fragrances in the Frederic Malle line. Their description:

At the fore, an exuberant dose of Turkish rose — 400 flowers per 100ml bottle, no less. Beneath, a bed of patchouli heart imbued with sandalwood and frankincense. An accord of clove, blackcurrant and raspberry binds the perfume together for a final characterful brushstroke.

Fragrantica lists the notes, more prosaically, as: Turkish rose, raspberry, black currant, cinnamon, clove, patchouli, sandalwood, incense, ambroxan, benzoin and white musk. When I apply POAL, I smell the incense right away, with the rose. This is a warm, spicy rose, but it’s very elegant. The incense note and the elegance remind me a lot of Amouage’s Memoir Woman. This fragrance, too, could make me feel under-dressed for the occasion. Several commenters have written that POAL is a story of rose, patchouli, and incense; and those are all present very strongly, but there are complexity and layers to this fragrance, with other notes playing peek-a-boo between those three pillars. I definitely pick up the raspberry and black currant in the first hour after applying, but they dance in and out, sometimes at different moments on my two wrists. I don’t really smell cinnamon, which is just as well; I love cinnamon but too much of it in a fragrance gets me thinking of those cinnamon brooms they sell in supermarkets in the fall, and I don’t want myself or my expensive perfume to smell like those!

POAL is smooth like velvet, warm with spice but cool as well. I chose the portrait of Mrs. Charles E. Inches, by John Singer Sargent, as an illustration because it conveys so well the aura of mystery, warmth, sensuality combined with cool reserve, that the fragrance embodies. This is a truly timeless fragrance; the right young woman could wear it, as could a more mature woman of any age. The rich browns in this portrait, including the lady’s abundant hair and beautiful eyes, evoke the warm woods of the fragrance, while the perfume’s incense note, alluring yet somehow cool, echoes her calm gaze. The rose note, of course, is reflected in the deep red/crimson of her velvet dress, which so beautifully displays and contrasts with her long, lovely, white neck and her equally pale decolletage and shoulders, so daringly exposed but communicating, at the same time, that the beholder could not dare to touch.

As the fragrance develops, the rose fades away gracefully, leaving in its perfumed wake the incense, sandalwood, and patchouli. I find the patchouli here is quite subtle; it clearly lets its presence be known, but this is a refined patchouli that engages politely with its neighbors. Portrait of a Lady is a gorgeous fragrance. I wouldn’t waste it on the office, where it would be as out of place as Mrs. Charles E. Inches herself. I’m happy to wear it at home, sitting in my 1905 house, where it doesn’t seem out of place. But where this lady really wants to go, I feel, is to an elegant dinner party in the formal dining room of a Gilded Age estate. Maybe she and I can compromise by going out for cocktails at the Gold Room of New York’s Palace Hotel. I had afternoon tea there many years ago, when the hotel was still “The Helmsley Palace”, and I would love to return with my husband and my Portrait of a Lady.

Have you tried any of the Frederic Malle line?

Added later: I was remiss in not posting where I got my coffret of Malle fragrances, which included Portrait of a Lady. On a family trip to Dublin two summers ago, my patient family allowed me to drag them to a couple of perfumeries. One of them was the charming Parfumarija, a small independent perfumery that carries a beautiful selection of niche fragrances. I’ve visited twice, and both times I was helped by a (different) lovely sales associate. If you ever get to Dublin, I recommend a visit! 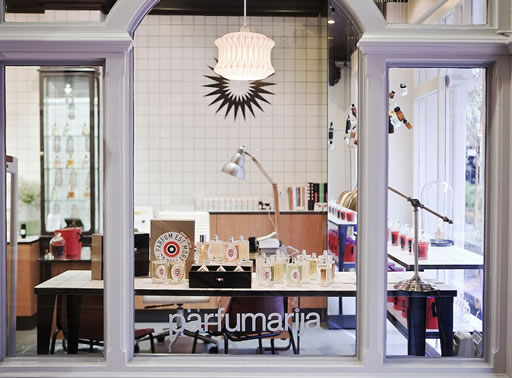 16 thoughts on “Roses de Mai Marathon: Portrait Of A Lady”