Better late than never! This week I thunked my sample of Miu Miu L’Eau Rosee, a very pretty fragrance for spring which is the 2018 flanker to the original Miu Miu. It opens with sparkling citrus notes of lime, lemon, and bergamot, with a tinge of green from cassis (blackcurrant) buds. The floral heart is dominated by peony and lily of the valley, supported by light fruity notes of pear and peach. I don’t smell much of the rose note in the heart. The base is mostly a soft musk, with hints of spice, sandalwood and vanilla. This one falls into the category of “happy to wear it to finish the sample, don’t need a full bottle.” But I would love to be able to buy a coffret of minis of Miu Miu and its flankers, the bottles are adorable!

There’s a breath of spring in the air this morning (unlike yesterday, which was cold, rainy, and windy), so the sample I thunked today was Miu Miu’s L’Eau Bleue. This was the first flanker to the original Miu Miu, launched in 2015. L’Eau Bleue came along in early 2017. Meant to evoke light and happy spring awakenings, it is described on Fragrantica:

Spring flowers of lily of the valley in the top go into the heart of green notes and white flowers covered with morning dew. An akigalawood accord, a molecule developed by Givaudan which smells of patchouli, peppery notes and woody flavors of oud, forms the base of the perfume.

The nose is Daniela Andrier. Most wearers find the lily of the valley note to be quite dominant, and it is clearly present, though I don’t find it as dominant as others do. It’s not a heavy note, it is quite airy, but it stands out among the other light, dewy notes. I love lily of the valley and so I’ve enjoyed my sample of L’Eau Bleue. I don’t need a full bottle, although if a mini of the adorable bottle fell in my lap, I wouldn’t refuse it!

This would be an ideal scent for a girl or young woman who is just beginning her fragrance journey. Can you suggest any others?

Fashion house Miu Miu launched its first fragrance in 2015, Miu Miu. According to Fragrantica, it was meant to emphasize lily of the valley:

The composition of the fragrance is signed by perfumer Daniela Roche Andrier, known for her creations for the house of Prada (as well as Bvlgari, Marni, Bottega Veneta). As Danielle explains it, the focus is on lily of the valley flowers supported with floral notes of jasmine, rose and green notes, as well as a special ingredient created by Givaudan, akigalawood, which develops the scent of patchouli, notes of pepper and woody aromas of oud. The composition of Miu Miu fragrance opens in a fresh and floral manner, and as it develops it begins warmer and woodsier, says Danielle.

I was disappointed when I tried it, though I liked it, because to me the lily of the valley note was not evident enough. Miu Miu felt to me like a pretty, greenish floral, but I really didn’t experience it as a muguet-centric fragrance, in spite of the stated focus and the promotional materials featuring a gorgeous lily of the valley textile design. 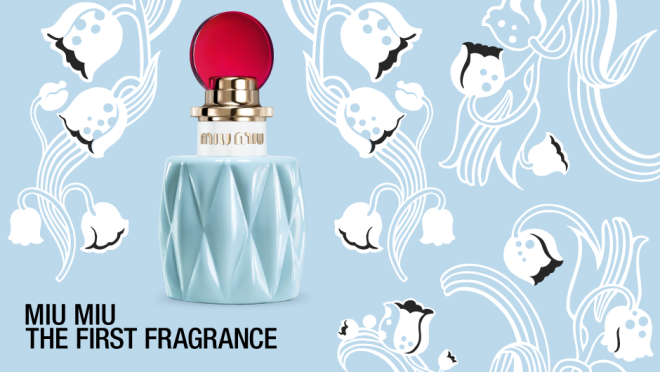 Next came Miu Miu L’Eau Bleue, in 2017. Ah, that’s more like it! The dewy greenness of this flanker correlates better, to my nose, to lily of the valley. The fragrance reads as crisper and greener than the original. Also, I greatly prefer L’Eau Bleue’s bottle over the first Miu Miu — the clear turquoise glass and light yellow top really appeal to me, and the brightness of the clear blue glass matches the brightness and transparency of this fragrance. It is a happy, cheerful, spring-into-summer fragrance. Later in the summer heat, I will probably want Un Jardin Sur le Nil, which is marvelous in really hot weather, but for spring and early summer, L’Eau Bleue is a lovely choice. Perfumer Daniela Andrier clearly has a way with floral notes; when I looked her up on Fragrantica, I was surprised to see how many of her creations I know and like, including many she did for Prada, like the marvelous Infusion d’Iris and dozens of others. (Ms. Andrier was also the perfumer behind Tiffany’s new fragrance, Tiffany & Co., an elegant floral scent launched in 2017 and a new favorite of mine). 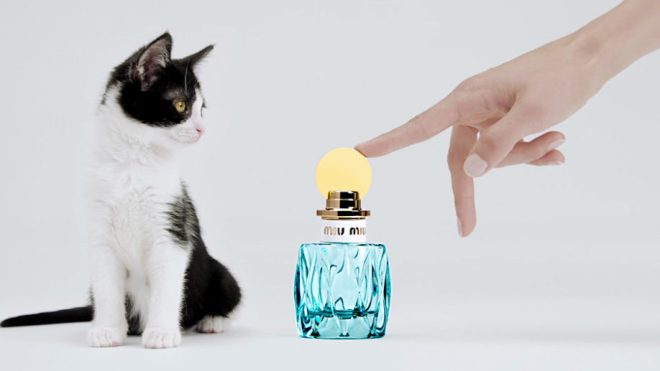 And now comes Miu Miu L’Eau Rosee. Yes, as the name suggests, it is pink. The muguet heart note is joined by peony and rose, as well as peach and pear, and this third flanker is more of a fruity floral than the first two scents. It isn’t sugary or sweet, though, and it has a pleasant gingery, spicy, light woodiness to its drydown, which lingers for several hours after first application. Like the other Miu Mius, it has a playfulness and sprightliness that is youthful and appealing. 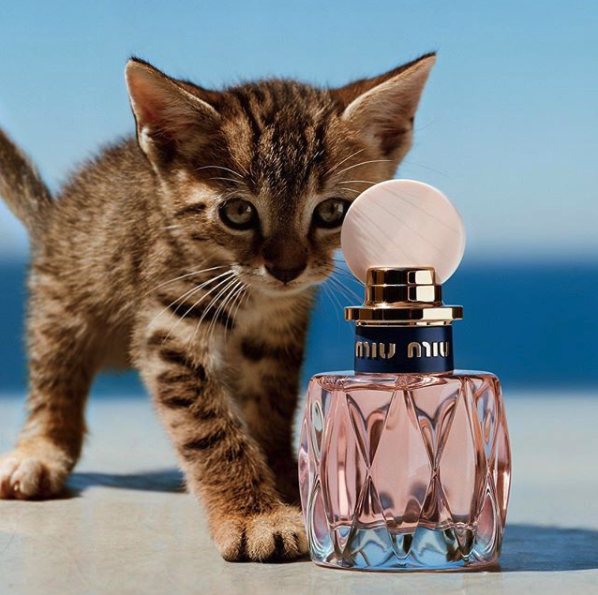 The lily of the valley note is present, albeit one created by hints of gardenia, tuberose, jasmine, and honeysuckle, according to the notes listed on the Miu Miu website, but the pink peony note is the most dominant. They blend well together, and this flanker retains the dewiness of its predecessor. It is also an appealing option for spring and summer, but if you really want muguet, you should look to L’Eau Bleue or some of the other fragrances in this May Muguet Marathon. Have you tried the original Miu Miu or either of its flankers? What did you think?