So after yesterday’s “angelic” scent, today we have Tom Ford’s F**king Fabulous as the daily sample from my Advent calendar. I must say, without the calendar and a sample that was a gift, I don’t think I would ever have tried it, because I dislike the name so much. I mean, who is the intended buyer — middle school boys, sniggering at dirty words? Please.

However — gonna go out on a limb here and say, I like it. Thankfully, it’s not a “love it, must have it” kind of like. I really do like some of Tom Ford’s fragrances, but I resist the whole fashion marketing schtick, the snob chic, and I think the prices are ridiculously high. There, I said it! I hope I haven’t given offense. Back to the SOTD, which I’ll refer to as Fabulous. It was released in 2017 and it was hyped to the max. Fragrantica characterizes it as a leather fragrance, but the leather isn’t a heavy one, to my nose. Notes listed on Fragrantica include: Top notes of Clary Sage and Lavender; middle notes of Bitter Almond, Leather, Vanilla and Orris; base notes of Leather, Tonka Bean, Cashmeran, White Woods and Amber. It’s an unusual and successful combination, especially that herbal opening with sage and lavender, which I enjoy very much. That leather note in the middle stage is, to my nose, more like suede; it’s very soft. It blends well with the vanilla and orris notes. I think the bitter almond accord is what some commenters have perceived as a smoky rubber scent. I don’t smell burning rubber, but I can sense how it might smell that way to someone else. If I had to sum up this fragrance in two words, they would be “lavender suede.”

Others have commented that the leather smells powdery to them, and I get that too, probably from the orris, plus the soft, warm base notes; Fabulous is unexpectedly cozy and cuddly. Many commenters talked about a similarity to baby wipes, but I think that’s really because many traditional baby product scents include lavender and vanilla, both of which are in evidence in Fabulous.

That’s pretty much my experience with it! I enjoyed sampling it, but I won’t be seeking it out. Have you tried it? What did you think? And how do you react to some of the names of TF fragrances that appear chosen to titillate, if not offend? 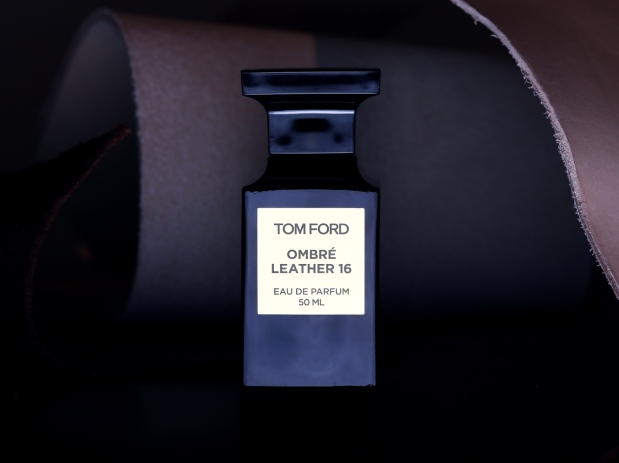 Today’s Scented Advent SOTD is Tom Ford’s Ombré Leather 16. (Aha! I remembered, with help from Google, how to put an accent aigu over an e!). I rarely seek out leather-based fragrances, the exceptions being Cabochard and Zara’s Vibrant Leather, so it’s actually a good thing to try this one in a small sample, as a surprise in my Advent calendar.

As soon as I dab it on my wrist, I smell that smoky, tarry scent we have come to associate with “leather” in fragrances. It’s not overpowering, but then again, I was dabbing from a small sample vial. I imagine that if one were spraying, one would have to be careful not to overdo it. Many commenters online, including the great fragrance blogger Kafkaesque, have concluded that Ombre Leather 16 is a lighter sibling of Tom Ford’s mega-hit fragrance Tuscan Leather. I don’t know, as I haven’t tried Tuscan Leather, but if Kafkaesque says so, I’m inclined to defer to her!

Created by Sonia Constant and launched in 2016, this leather has notes of leather, violet leaf, oakmoss, cardamom, jasmine sambac, and patchouli. Some commenters smell the violet leaf right away; I don’t. What I get right away is the smoky, tarry leather; then it fades (but doesn’t disappear) just enough to reveal the other notes. Apparently the leather note is based on an older synthetic molecule with a distinguished perfume history, isobutyl quinoline. Overall, the additional impression is dry and a bit green, thanks to the violet leaf, cardamom, oakmoss, and patchouli. The way the leather appears strongly at the outset, then slowly retreats, really does give the impression of ombré fabric — very clever! It becomes very slightly sweeter during its drydown, but it is not fruity, to my nose.

About an hour into wearing it, I’m really enjoying Ombré Leather 2016, though it’s not something I would buy for myself (full disclosure — I wouldn’t buy most Tom Ford fragrances, as I think they’re ridiculously overpriced). It has been reformulated, also by Sonia Constant, and there is also now a parfum version, launched this year, which is said to be a more floral leather. I might like it a lot on my husband, though; I’ll have to try my sample on him!

What Men Should Smell Like has a terrific analysis of Ombré Leather; the featured image is borrowed from that review. As Friday is usually Perfume Chat Room day, please feel free to chat about anything in the comments!

The garden centers and grocery stores (the only places I go these days) are full of potted hyacinths, one of my favorite flowers and favorite scents. Yesterday, in anticipation of Easter next weekend, I bought two pots of forced hyacinth bulbs: one has flowers of a delicate, creamy pale yellow; the other’s flowers are a cheerful, slightly tacky, bright pink. So the scent of real hyacinths is wafting through my house — what better time to review a recently acquired decant of Tom Ford’s Ombre de Hyacinth?

I had wanted to try it for a while, but it is discontinued and not easy to find. Imagine my delight when I saw it listed on the website of a decant subscription service I was considering! Sign me up! And I did.

END_OF_DOCUMENT_TOKEN_TO_BE_REPLACED

I encountered Tom Ford’s White Suede quite early in my perfume journey, when I was searching for other lily of the valley fragrances because I had been so disappointed in the current eau de parfum formulation of Diorissimo (I have since learned that the EDP is an entirely new creation by Francois Demachy, and the EDT is closer to what I remember). White Suede‘s notes are listed as: rose, saffron, thyme, mate tea, olibanum, lily-of-the-valley, amber, suede and sandalwood. Fragrantica’s readers list lily of the valley among the top three strongest notes, so I had to try it. Shout-out here to a lovely sales associate at Neiman Marcus, who patiently showed me a number of LOTV fragrances and gave me a generous sample of White Suede. I have found that the two department stores that are unfailingly helpful with samples are Neiman Marcus and Nordstrom. When I buy fragrance from a general retailer as opposed to online, or at a specialty boutique, it’s usually at one of those stores.

White Suede jumps right out with a strong but soft suede note. I don’t smell thyme at all, which is supposed to be one of the top notes, but I do smell a hint of the tea note that is also supposed to be part of the opening. But White Suede was never meant to be primarily herbal or floral: it was part of the “White Musk Collection”, more focused on a lighter, cleaner musk than Tom Ford’s earlier scents. And yes, musk moves to center stage pretty quickly in the fragrance’s progression on my skin.

As that happens, a green undertone also emerges, which I think is meant to be the lily of the valley, but I doubt I would identify it as such if I weren’t looking for it.  That’s not to say I dislike White Suede; actually, I like it quite a bit. I tried amping it up by layering it with a more strongly muguet-centric fragrance, Woods of Windsor’s soliflore Lily of the Valley, which was quite nice; they played well together. I think the reason White Suede doesn’t hit my nose as “lily of the valley” on its own is that traditionally (and in real life), muguet has a lemony aspect to it, and that is completely absent from White Suede. Muguet can also have a soapy tone to it (or maybe we associate soap with muguet because that fragrance note is so widely used in soap and bath products). Since clean white musks also have a certain soapiness, which many of us smell as akin to laundry, there’s a relationship there which White Suede seems to exploit.

White Suede is definitely a unisex fragrance, and it’s quite nice. It is also quite expensive, and I wouldn’t characterize it as a “muguet” fragrance despite the impressions of Fragrantica readers, so if your heart is set on a true lily of the valley scent, there are better and cheaper options, including some high-end choices from Dior, Hermes, and other luxury houses. It does have enough kinship with lily of the valley to layer nicely with a more traditional muguet floral, so if you like suede, musk, and muguet, give that a try and let us know what you think!