I don’t normally do the WordPress “Daily Post”, but one of this week’s word prompts caught my eye: “aromatic.” Well, I certainly have a response to that, as some of my favorite fragrances have aromatic qualities, even if they aren’t primarily classified as “aromatics”. But let’s start with a classic: the aptly named “Aromatics Elixir” by Clinique.

In many ways, Aromatics Elixir is a quintessential 1970s fragrance. It was launched at the start of that decade, created by the great perfumer Bernard Chant, for a new brand (Clinique) of the Estee Lauder company. It is green, dry, herbal and strong. Its creators positioned it as a “non-conformist chypre”, a perfume ahead of its time, that went “beyond perfume.” To me, it is in many ways the scent of 1970s feminism: independent, strong, challenging traditional strictures without becoming androgynous. Very in-your-face and unapologetic, but with its own beauty. If I were to assign a face to it, I would choose 1970s supermodel Lauren Hutton, a non-conformist beauty with her gap teeth and American style. Hutton had a chameleon-like quality, able to pull off effortless elegance in couture evening wear but showing off that same great bone structure in a plain white shirt, outdoors in the fresh air. Whenever I picture her in my mind, she is outside.

Luca Turin describes the impact of Aromatics Elixir thus: “Smelling Aromatics Elixir on a strip and especially in the air following a string of ‘modern’ fragrances is like watching Lauren Bacall in The Big Sleep after twelve episodes of Cheers.” That pretty much sums it up; as he notes, Aromatics Elixir “achieves at once salubrious radiance and luxurious dusk.”

But Bernard Chant created another great aromatic fragrance for Estee Lauder, shortly before Aromatics Elixir: 1969’s Azuree. I was lucky enough to find an affordable, unopened tester of Azuree parfum online – wow. This is a really complex fragrance with a lot of different notes balanced against each other. Luca Turin calls it a “citrus leather” with a leather-chypre heart and gives it five stars, contrasting its ongoing fidelity to the original vision of its creator with the sad dismantling of his other leathery masterpiece, Cabochard. Fragrantica lists its notes as follows: top notes – aldehydes, artemisia, gardenia, basil, sage, bergamot; middle notes – cyclamen, orris root, jasmine, ylang-ylang, geranium, vetiver, rose; base notes – leather, amber, patchouli, musk and oakmoss. My bottle is labeled as “parfum”, not “eau de parfum”, and both its strength and longevity bear that out, as does the slightly oily slick on my skin when I first spray it on. Other commenters have noted the excellent spray nozzle on this bottle, which allows you to spray a small amount in fine droplets. That is all you need! Azuree is strong stuff!

On my skin, Azuree opens with a jolt of aldehydes, bergamot and artemisia, with herbal tones from the basil and sage top notes, although I can’t distinguish those separately.  In the middle stage, I mostly smell orris root (really delightful and earthy, with an underlying carroty sweetness), vetiver and a hint of ylang-ylang. The story behind Azuree is that Estee Lauder, founder of the cosmetics empire, wanted to capture the outdoor scents of Cap d’Antibes on the azure sea of the French Riviera, where she had a villa in the years when Cap d’Antibes still looked more like the landscapes painted by Claude Monet and other Impressionists than the overbuilt hodge-podge it has become. Azuree does have a Mediterranean aura of dryness, citrus, herbs, and pine resin, as if one were looking down a dry Riviera coastline toward the stone pines of Juan-les-Pins from a sunlit Mediterranean garden. While roses, cyclamens and geraniums are listed among the heart notes, and they are all Mediterranean flowers that might grow in such a garden, along with the green herbs listed among the top notes, I really can’t pick them out. 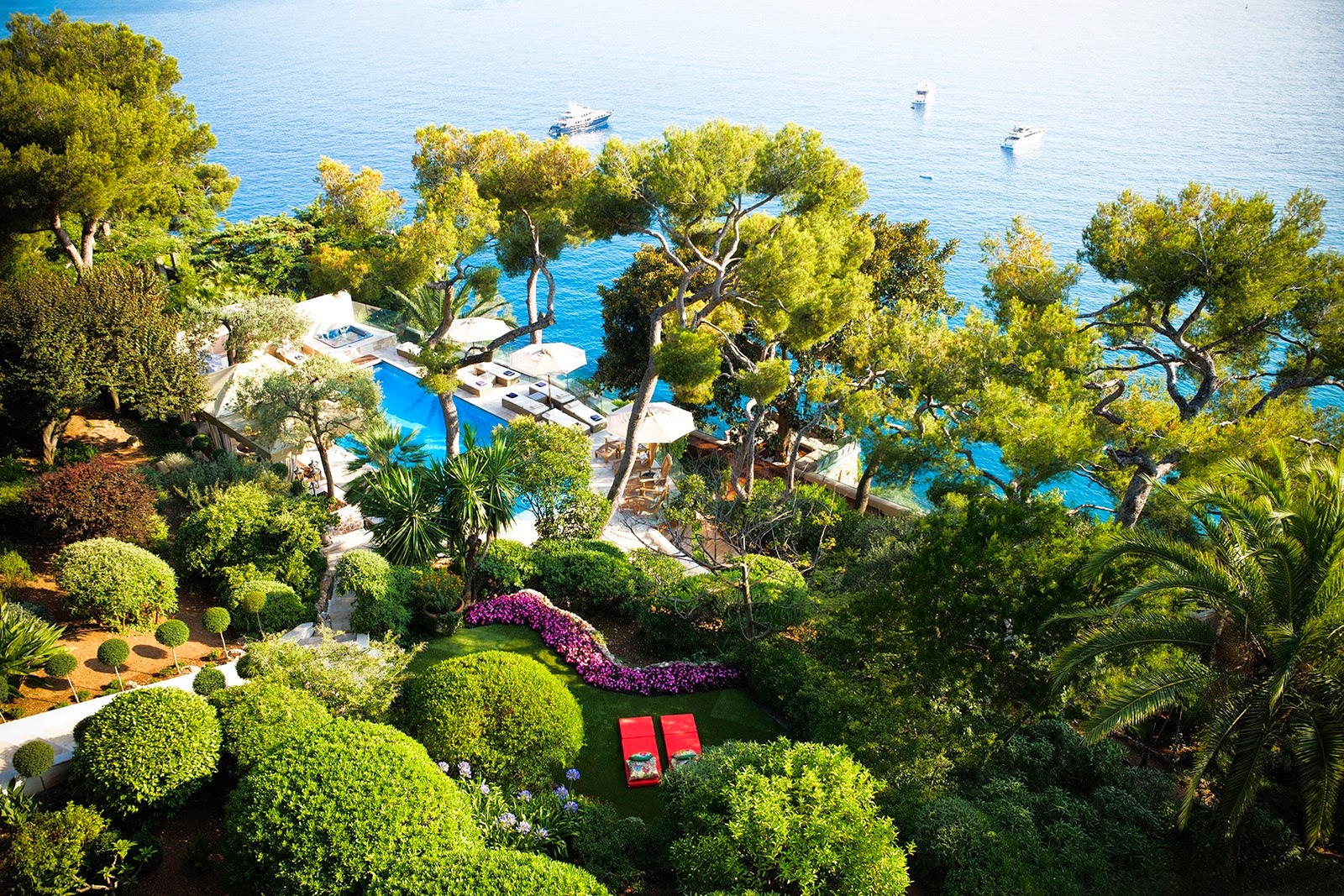 View from villa in the French Riviera

As it dries down, Azuree becomes more leathery, dry and oak-mossy. At this stage, it LASTS.  If I put it on my wrists at night, I can still clearly smell its final drydown stage the next morning. Like Aromatics Elixir, this fragrance is so very different from the current trends of sweet, fruity or gourmand scents! It doesn’t smell old-fashioned at all, it smells almost radical. Yet at the same time, if one were to characterize it as a person, one might describe a free-spirited young woman, wearing no make up but with an “old soul” gazing from her eyes. Definitely one of the great beauties of the 1970s. If Aromatics Elixir is Lauren Hutton, Azuree is Margaux Hemingway, whose grandfather famously spent so much time on the unspoilt Riviera with the most glamorous, unconventional creatives of the day.

Have you worn Aromatics Elixir or Azuree? Or perhaps another Clinique classic, Wrappings?