Occasionally I find a fragrance gem online, for sale by a resale shop that has discovered the internet. This spring, my find was the first fragrance from designer James Galanos, an eau de toilette named, simply, Galanos. James Galanos was highly selective in all his choices, from the very wealthy women who were his preferred and devoted clientele (most famously, Nancy Reagan), to his refusal to license his name for almost anything: the two exceptions were furs, and fragrance.

There are only two Galanos fragrances: the first, eponymous one, and a flanker called Galanos De Serene. Both can be found in eau de toilette and parfum though both have been discontinued. I found an unboxed bottle of the first eau de toilette, for sale online, and I knew I would probably like it as I already had a small bottle of the parfum. The fragrance was created in 1979 and won a FiFi award in 1980, the one for “Women’s Fragrance of the Year — Prestige”. I have been unable to find out who the perfumer was; please comment below if you know! Angela at “Now Smell This” wrote a terrific review of Galanos, aptly comparing its appeal to that of classic vintage clothing.

There was only one catch to my purchase: when it arrived, the top of the sprayer turned out to be a replacement that didn’t work. I contacted the seller (from whom I had successfully bought a vintage fragrance once before), who immediately offered to send a replacement top or a partial refund. Since I was pretty sure I would be able to use a Travalo to get the fragrance out, the price had been very reasonable, and it really wasn’t worth the seller’s time to send a new top that might not work either, I took the partial refund and bought my first Travalo. Happily, it worked!

Basenotes analyzes Galanos as follows: top notes: lemon, orange, mandarin, chamomile, coriander, clove, and bay leaf; heart notes: lily of the valley, orange blossom, jasmine, gardenia, ylang ylang, rose, geranium, carnation; base notes: cypress, musk, amber, vanilla, tonka bean, vetiver, cedarwood, oakmoss, sandalwood, and patchouli. It smells to me like a cross between a floral chypre and a green chypre, with the herbal top notes in smooth balance with the floral heart notes, and its woody, mossy, aromatic base. It reminds me a bit of Estee Lauder’s Azuree, but with a more floral, 1980s vibe. The notes that “speak” to me most strongly are the carnation and geranium notes, followed closely by ylang ylang and gardenia, but the herbal notes are evident from start to finish.

James Galanos was famous for the craft of his designer clothing, often compared favorably to Parisian “haute couture” although his creations were ready-to-wear (but still VERY expensive). Galanos’ designs reached their height of fame in the decade of excess, the 1980s, and he used only the most expensive materials and finest workmanship, but you rarely see huge puffy sleeves or gigantic flounces on his dresses.

You see elegant, feminine lines, often enhanced by exquisite embroidery. Nancy Reagan once commented about his dresses that “you can wear one inside out, they are so beautifully made.” His fragrance is consistent with that elegant, luxurious simplicity: understated, classic, of its era but also timeless. It feels like an elegant accessory, meant to complement the wearer and the outfit instead of outshining or competing with them. 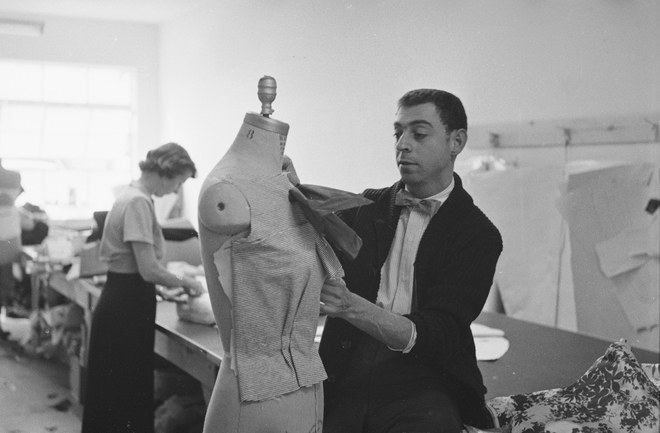 Although James Galanos retired in 1998 and died in 2016, you will still see his creations on the red carpet, since many stylish women wear vintage Galanos gowns to occasions like the Academy Awards and the Met Costume Institute Gala, where they are as elegant and timeless as ever. I wonder if any of the wearers know that they could also wear the perfect fragrance accessory with those beautiful gowns?

Do you have any fragrances that you think of as couture accessories? Favorites?

Just had to add this photo, taken in the early 2000s in San Francisco, when Mr. Galanos was delighted to discover a perfume boutique that still carried his fragrance: 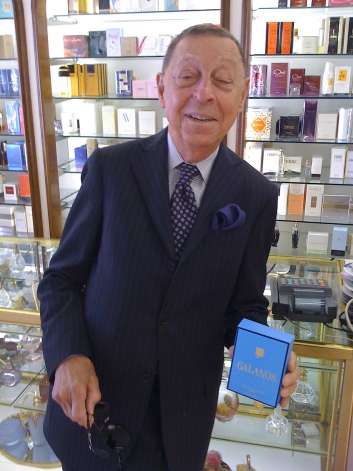 James Galanos with his fragrance; image from San Francisco Chronicle